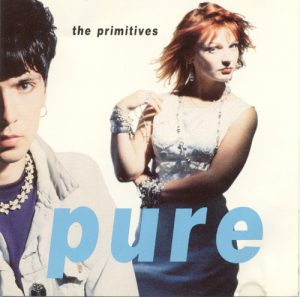 As the follow-up to an instant indie pop-punk classic, the second Primitives album, Pure, never really stood a chance of being held in the same esteem as their debut, especially as RCA stuck the fine stopgap single, “Way Behind Me,” on both the reissue of Lovely and the initial pressing of Pure.

So kudos to Paul Court and Tracy Tracy for mixing it up, and not even trying to replicate the debut. With producer Paul Sampson filling in for departed bassist Steve Dullaghan, Pure was weirder and more psychedelic, but also featured Court on more lead vocals than was strictly necessary.

A perfect example of Pure’s charms came on “Dizzy Heights,” which opens with a fuzzy guitar bouncing back and fourth, as well as some busy drums by Tig Williams, augmented by a drum machine, because this was the U.K. in 1989, and weird dancey rhythms were not just au courant, they were actually the law.

While it was probably too crowded by half, Tracy’s vocals were spot-on and with Court’s guitar sitaring all around her on the chorus, “Dizzy Heights” sounded just like its name.

We shine so bright
Dizzy heights

With Court supporting her at every vocal turn, it was a pleasure to hear Tracy wrap her vocals around “diiii-zee-eeee” every single time she sang it, and even neater, “Dizzy Heights” found its way out of itself, getting more straightforward at the end as Tracy chanted “never reach the end” over and over and over until the end of the song.