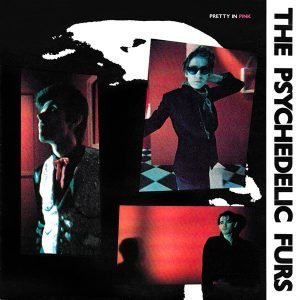 A housekeeping note here: once again, Columbia meddled with the track order and the U.S. version of Talk Talk Talk came out significantly different than the U.K. version. It was all of the same songs, but the order was radically different — the U.K. version opened with “Dumb Waiters” and closed with “She is Mine,” whereas the U.S. version had those two songs closing side one. As even though the 2002 CD reissue went with the U.K. version, I’m still sticking with the one that blew me away as I was turning 19, the one that opened with the wannabe hit single — no doubt chosen by some evil record exec inadvertently doing the right thing for the wrong reasons — the song that is far more famous as a film, “Pretty in Pink.”

Caroline laughs and it’s raining all day
She loves to be one of the girls
She lives in the place in the side of our lives
Where nothing is ever put straight
She turns herself ’round and she smiles and she says
‘This is it, that’s the end of the joke’
And loses herself in her dreaming and sleep
And her lovers walk through in their coats

In a lot of ways, “Pretty in Pink” sets the tone for Talk Talk Talk: the sound is thicker and punchier than The Psychedelic Furs, with merciless drummer Vince Ely mixed high, and Mr. Butler singing about a subject that he really didn’t touch upon that much on the first record, sex. In the case of “Pretty in Pink,” it’s a sympathetic look at a girl who is giving it up in an endless and so far fruitless search for love, and the cruel boys who were taking advantage of her.

All of her lovers all talk of her notes
And the flowers that they never sent
And wasn’t she easy?
Isn’t she pretty in pink?
The one who insists he was first in the line
Is the last to remember her name
He’s walking around in this dress that she wore
She is gone, but the joke’s the same

With Duncan Kilburn trading his sax in for an organ that provides color, especially in the second half of the song, and Ely going into a modified Phil Spector beat on the chorus while the guitars swirl around him, “Pretty in Pink” sounded just like its name, an absolutely lovely pop confection. That said, in 1981, there was absolutely no way that anybody who sounded like Richard Butler — as raspy and scabrous as ever, even as he was hitting more of the notes — was going to break the mainstream.

And in fact, they never really did: their highest-charting U.S. single was “Heartbreak Beat” at #26, and their highest-charting album was Midnight to Midnight at #29, both of which probably were helped by the fact that the then red-hot John Hughes named a very popular film after this song. You know, the one where Molly Ringwald chooses the wrong guy at the end. In any event, the Furs — by this time down to the trio of Richard & Tim Butler plus John Ashton — re-recorded a perfectly serviceable and totally unnecessary version of the song for the film. It started out OK, even garagey, but got worse as it kept going until it fell apart with a shitty generic sax solo at the end. Which was . . . a choice, considering that there wasn’t any sax on the original.

And while it wasn’t nearly as bad the equally unnecessary remake of “Don’t Stand So Close To Me” that also came out that year, it gets docked because far more people have heard the soundtrack version than the stellar original.

In any event, “Pretty in Pink” announced that on their sophomore effort, The Furs were going to be poppier and more sophisticated than they were on the debut, but — and this is key — without sacrificing a single whit of either their power and uniqueness.