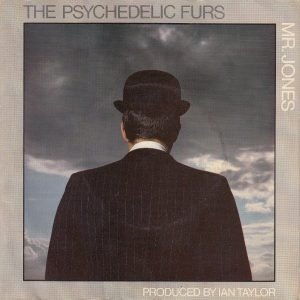 Driven as ever by a kick-heavy Vince Ely drum part, “Mr. Jones” replicates the debut’s trick of sticking the guitars of Roger Morris in one speaker and the guitars of John Ashton in the other speaker, and then having them in constant conversation with not just each other, but the song as a whole: somebody’s guitar is always rushing out ahead of the song, pulling it forward, and yet always creating space for Mr. Butler to throw some shade.

Mrs. Jones is seventeen and six and twenty four
Moderately pretty, she is all the girls you know
We are going far away, we’re going for a ride
Mr. Jones has got a plan if you just come inside

Even before it hits the first of several choruses, “Mr. Jones” sounds fucking great: noisy and melodic and sleek as all fuck, tearing down the highway just looking for something to run over, and things get even better on the chorus, which I just realized might even be throwing some shade at Ian Curtis, who’d only just recently passed.

So good so far
Slow down, ha ha
Movie stars and ads and radio define romance
Don’t turn it on
I don’t wanna dance

Well maybe not so much shade, I mean, the bands shared a producer, Martin Hannett. But it was Curtis, on the almighty “Transmission,” who commanded us to “dance dance dance to the radio,” so perhaps Butler was just pointing out that sometimes, he just wants to chill.

If so, he’s the only one in his band, because after each chorus, there’s a quick instrumental break, often involving Duncan Kilburn’s sax trying to sound like a guitar or maybe it’s John Ashton’s guitar, trying to sound like a sax. Either way, it’s striking, each and every time, and just short enough that you’re definitely going be paying attention to the words.

Mr. Jones can turn you on and turn you off again
Mr. Jones is all of you who live inside a plan
Put your head upon the pillow, never put it down
That would only wake you up and turn your head around

In the end, Butler chants “all-all-all-all-all-all-alright now” as the guitars continual to squeal and squall and eventually he just stops trying to keep up with the rest of the band and Mr. Jones rolls away into the night, still making a beautiful noise.

When the Counting Crows covered this a dozen years later and turned it into a unlikely hit, they definitely went back to the Dylan folk-rock well, rather than the big roaring post-punk sound.