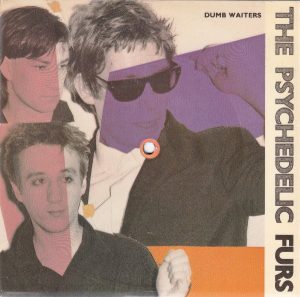 And so “Dumb Waiters” eschews the forward momentum one normally associates with the Furs, Vince Ely laying way back on his snare, playing it on every other measure — and almost Bonham-esque beat which gives “Dumb Waiters” a feeling of menace, like it’s kinda wandering the streets like a monster looking for victims — while Richard Butler, rasping and weary-sounding, chants the verses like he’s worried that the monster is going to get him if he doesn’t get it all out.

She has got it in for me
Yeah, I mean it honestly

And just as he holds the long note on “meeeeeeeeeeeaaaaannnnnn” he almost does get eaten, as that crazy-ass sax riff starts back in and rips everything apart, and it is one of the greatest things I’ve ever heard in my life, a completely insane combination of vocals and sax that is at once totally abrasive and mind-bogglingly beautiful.

She has got in for me
Yeah I mean it honestly

After the second chorus, things get even nuttier: the guitars John Ashton and Roger Morris just kinda wander around the beat, playing drony beeping noises — occasionally almost soloing, but not really — while Kilburn makes random noises with his sax, because why the hell not at this point?

It got even crazier after the third verse: long sax solos, long guitar solos that sounded like spaceships landing in the desert, all the while Ely playing the same damn beat, like he knows he’s the only person bringing any kind of stability to all of the insanity.

When I first heard “Dumb Waiters,” it made no fucking sense; just complete and total chaos masquerading as a pop song. And yet, and yet, as I dug into Talk Talk Talk, it turned on me, and suddenly “Dumb Waiters” was practically my favorite song on Talk Talk Talk, not despite of all of the chaos, but because of it. What I love about it now is the continual melee consisting of the relative stability of Butler’s vocals and Ely’s beat, the take-no-prisoners sax riff and the fucked-up guitars.

Hilariously, not only was “Dumb Waiters” the opening track of the U.K. version of Talk Talk Talk — instead of, you know, “Pretty in Pink” — they even released it as a single. A single! It pretty much stiffed in the U.K., but Wikipedia tells me that it made #27 on the fucking U.S. Dance Charts. Honestly, this seems like a joke; somebody hacking Wikipedia, because imagine that you’re out at a dance club in the summer of 1981 grooving to Rick James or Evelyn “Champagne” King and this cacophony comes on? I don’t buy it.

In any event, nothing else had ever, and nothing else will ever sound like “Dumb Waiters”; it is totally and utterly sui generis, and you would be well within your rights to be completely repelled by it.

But you shouldn’t. Cos it’s glorious and beautiful.