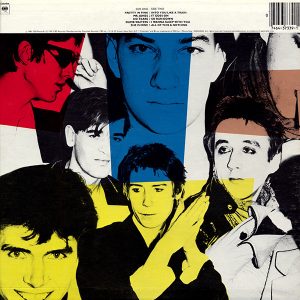 And why not? Train songs should have that kind of momentum, even if they’re only metaphorically about trains, and “Into You Like A Train” has momentum in spades, starting with Ely’s kick-drum heavy beat, totally and completely unrelenting. Kinda like Butler’s lust.

Check out how Ely — already hitting all of his drums at once like five Mo Tuckers — somehow ramps it up at the end of each chorus. It’s utterly remarkable, and a big big reason I love this song so much.

And yet, and yet, the ending of “Into You Like a Train” kinda makes me sad. Or maybe nostalgic. Butler has stopped singing, though everybody else is on full throttle, and Kilburn comes out with an almost mournful sax riff a couple of times before the fade, and it’s like turning around and watching my youthful innocence fade away into the distance or something.

Or it could be because the song is ending, and I want it to last forever now.