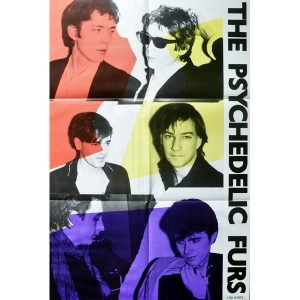 If you’ve been reading this, then you know the amount of wonder and appreciation that I have for Vince Ely’s drum parts, and the beat that he created for “So Run Down” is his greatest of all. I can only imagine everybody else’s faces when he pulled it out for the first time in rehearsal. Everybody shaking their heads in disbelief, like you want us to write a song around that? Meanwhile, Steve Lillywhite is already trying to figure out on which beats he’s gonna add the reverb.

I mean it’s a fucking puzzlebox combination of hi-hat, snare and toms that continually whirls around itself, rising and falling and rising and falling with the best thing being how Ely’s able to slightly switch it up here and there, even pulling up for murderous snare rolls. But they figured it out, so after a couple of measures so we all check out the drumbeat in awe, the little furry people explode into action: is John Ashton & Roger Morris whipsaw their guitars around the drums, Duncan Kilburn slams his sax and Richard Butler unleashes a torrent of words. Because of course he does.

And yet somehow, “So Run Down” manages to wrest a standard verse-chorus-verse structure out of what should be unfilmable chaos, and without even a blink, they tornado into one of the catchier choruses on Talk Talk Talk.

And then, after the second verse — with Ashton, Morris and Kilburn all laying out — there’s a bass solo from Tim Butler. A long one. And hell, it might not even be an actual solo, but just rather what he’s playing on the rest of the song, which would have other been lost in the morass. In any event, everybody else comes back in, just in time for Butler to sing the bridge, set up by anthemic guitars and that Tazmanian Devil of a beat.

After that, one last verse and chorus — Butler tossing in a scabrous “ha ha” at some point — while the instrumentalists continual their evil psychotic dance around Ely’s beat until he finally slams the song to an end.