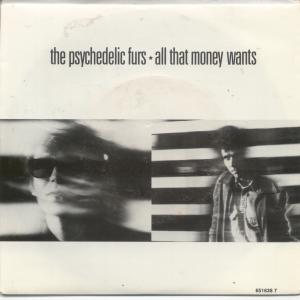 After the major disappointment of Mirror Moves and the misbegotten re-recording of “Pretty in Pink,” I didn’t even bother with 1987’s Midnight to Midnight, especially after I heard the single, “Heartbreak Beat,” a synth-drenched wannabe anthem that proved to be their highest-charting single here in the U.S., which means that some of you might remember it fondly. I do not.

I had completely disconnected myself from the music The Psychedelic Furs made in the mid-1980s, and in my own youthful arrogance, I figured that was that.

So imagine my surprise in the awful summer of 1988 when I heard “All That Money Wants,” a single specifically recorded for their 1988 best-of, All of This And Nothing. It was like “come home, little furry people, all is forgiven.”

Sure there were acoustic guitars in the mix, and Richard Butler wasn’t ever going to return to his scrabrous rasp, but “All That Money Wants” showed that they could still make big guitar-based songs even as a trio.

And it was really the layers of guitars that John Ashton put on the song that makes it: a virtual whirlwind of chugging rhythms and swirling leads that kept changing up in unexpected ways. And while I’m not sure we ever find out exactly what money wanted, it didn’t even matter.

As it turned out, the electro-acoustic blend of “All That Money Wants” proved to be the blueprint for the final two P-Furs albums, 1989’s Book of Days and 1991’s World Outside, both of which were . . . fine, but lacked the spark of the earlier records, as well as any utterly killer songs which would have forced me to engage deeper with each one. After that, the Psychedelic Furs broke up, and haven’t released any new music in nearly 30 years, though they still tour regularly.

Fan-made video for “All That Money Wants”


Official video for “All That Money Wants” (muddy sound)