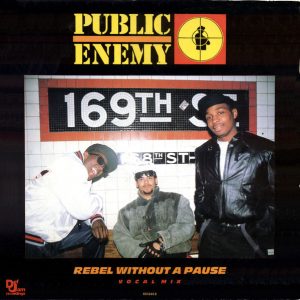 The first single from the monumental It Takes a Nation of Millions to Hold Us Back came out only a few months after their debut album, Yo! Bum Rush The Show!, but it was already light years ahead, an early example of the production technique of The Bomb Squad, who along with Sonic Youth on the rock tip, completely changed music in 1988.

Or at least changed me. I was never the same after those two records, neither of which I actually fully heard until they finished 1-2 in the 1988 Pazz & Jop critics poll, and so in early 1989, I knew that I had to give them a shot or ignore the critical conversation for the rest of my life.

And, of course, at first, I couldn’t make heads or tails out of either record, because there was too much going on to comprehend initially, but 30 years later, I’m still finding cool things in each record.

“Rebel Without A Pause” was an insane melange of the “Funky Drummer’ beat — augmented by electronic drums played by Flavor Flav — a sample of a sax that sounded like an air-raid siren, and of course the flow of Chuck D, who started off with the ethos-defining “Yes, the rhythm, the rebel” and just took off from there.

Yes, the rhythm, the rebel
Without a pause, I’m lowering my level
The hard rhymer, where you never been I’m in
You want stylin’, you know it’s time again
D the enemy, tellin’ you to hear it
They praised the music, this time they play the lyrics
Some say no to the album, the show
Bum rush the sound I made a year ago
I guess you know, you guess I’m just a radical
Not a sabbatical, yes to make it critical
The only part your body should be parting to
Panther power on the hour from the rebel to you

Chuck D had so so many words, and threw every one in your face like bass. Also in your face: that air-raid sax sample, which opens an instrumental called “The Grunt” by The J.B.’s, and makes a couple of periodic returns as the song progresses.

But of course, on “Rebel Without a Pause,” that sample looms over nearly single measure of the verses, initially an irritant, but really as much as a riff as anybody might play on a guitar. And eventually, it became a hook, as intrinsic as Chuck’s words or the interludes where DJ Terminator X scratches the chorus from their contemporary Chubb Rock’s “Rock and Roll Dude”

All in all, as the first creation by The Bomb Squad, “Rebel Without a Pause” portended great things to come.

“Rebel Without a Pause”


“Rebel Without a Pause” live