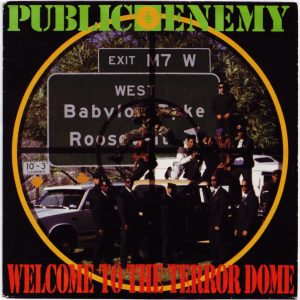 In the case of “Welcome to the Terrordome” they turn the guitar riff from future Certain Song “Psychedelic Shack” (produced the amazing Norman Whitfield, speaking of crazed geniuses) into an siren of doom, so it only makes sense that Chuck D starts off with “I got so much trouble on my mind” and then for the next four minutes fully immerses us in that trouble, the only respite being Flavor Flav interjections and an MC who ads an extra syllable in the word “welcoming.”

I’m not going to pretend that I know everything that Chuck D on about in “Welcome to the Terrordome,” for me, it’s really the sound of his voice on top of the ever-shifting melange of sounds, as well as that insane guitar sample, but obviously I know that he addresses the media controversy surrounding Minister of Information Professor Griff’s anti-Semitic and homophobic comments, but that’s just a small part of what’s on his mind. And hell, he was always addressing media controversies, as well as stirring them up.

In the end, I see “Welcome to the Terrordome” as such an insanely great piece of music that he could have rapped “we’re gonna fucking kill Jim Connelly” and I’d be nodding along going, “yeah, cool, man.”

“Welcome To The Terrordome”