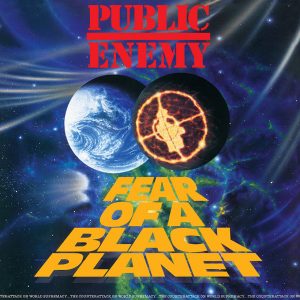 And speaking of Prince, I’m not sure when I realized that the crazy guitar sample that circles its way through the song was from “Let’s Go Crazy,” but I’d like to pretend that it was pretty early on in the proceeds. Lyrically, “Brothers Gonna Work It Out” is PE in full exhortation mode, promising the world that no matter what it throws at them, they’re gonna figure their shit out.

So many of us in limbo
How to get it on, (uhhh) it’s quite simple
Three stones from the sun
We need a piece of this rock
(Our goal) indestructible soul
Answers to this quizzing
To the Brothers in the street
(Schools) and the prisons
History shouldn’t be a mystery
Our stories real history
Not (his story)
We gonna work out it one day
Till we all (get paid)
The right way in full, no bull
Talking, no walking, (driving, arriving and stylin’)
Tell ’em — soon you’ll see what I’m talking ’bout
(Yeah!)
Cause one day
The brothers gonna work it out
[Brothers, brothers gonna work it out]

Then, on the chorus — er, sorry, the hook — it’s a complete trade-off between D and Flav, with a timely assist from Terminator X.

(You got it) what it takes
(Go get it) where you want it?
(Go get it) [get involved]
Cause the brothers in the street (are willing to work it out)

Between the scratching in of Bobby Byrd’s “get involved” from James Brown’s “Get Up, Get Into It, Get Involved”, and the actual singing by D and Flav (of harmonies) (kinda) of “are willing to work it out, it’s utterly amazing.

At the end, they’re so impressed at the massive, monolithic groove they’ve created, they stop rapping and and just stand there, admiring what they’ve done, as Prince’s looping guitar finally crashes the song to a close.

“Brothers Gonna Work It Out” was one of five singles released from Fear of a Black Planet, but because it was neither the hardcore jams of “Fight The Power” and “Welcome to the Terrordome” nor the Flav showcases of “911 is a Joke” and “Can’t Do Nuttin For You Man,” it stalled out at #22 on the Rap charts, the lowest showing of any of their late 80’s / early 90’s singles.

“Brothers Gonna Work It Out”