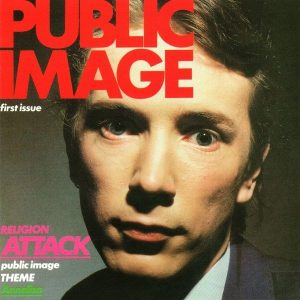 After the Sex Pistols broke up following their U.S. tour — wait, that’s not right. Start again.

After Johnny Rotten left the Sex Pistols following their U.S. tour, he almost instantly formed a band while his former bandmates caroused with bank robbers, made films and did smack, desperately trying to get their focus, which, of course they never did. Because they’d lost it.

Meanwhile, Rotten went back to his birth name of “Lydon,” recruited his buddy John Wardle, rechristened as “Jah Wobble,” ex-Clash guitarist Keith Levene and a drummer named Jim Walker, and remained hell-bent on continuing his plan to destroy rock ‘n’ roll, only this time, instead of the recontexutalized Chuck Berry riffs that dominated the Pistols, with truly pioneering music.

Most of which, I’ve, er, never really gotten into. Because I’ve always preferred recontextualized Chuck Berry riffs, doubly so at the time Public Image: First Issue came out.

That said, the firestorm of guitar that Keith Levene put out — stealing from U2’s “I Will Follow” two years before Boy came out — over Wobbles massive rumbling bassline and Walker’s echoing drums created a wonderful match for Lydon’s monumental howl, which started with “hello”, ended with “goodbye” and in between, addressed the wreckage of the Sex Pistols.

Or more specifically, it addressed Malcolm McLaren, the evil genius would brought the Sex Pistols together, and then did everything he could to then try to control what happened next, even as it became a cultural revolution that’s still echoing 40 years later.

This was all sung in that inimitable Lydon shriek, where every single time he would scream “public imaaaaaaaaaage” you can imaging little pieces of plaster falling from the studio ceiling, because it was that powerful. All in all, a fantastic debut single, and considering where his music was going for the next several years, a complete and utter feint. Which makes me love and respect it that much more, because it was kind of a “fuck you” to those of us who wanted a whole album of piledriving rock songs.

And, of course, things would get weirder. Much much weirder.