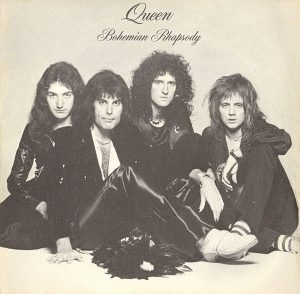 That would be in 1992, when it was used in the film Wayne’s World — an unlikely extension of a Saturday Night Live sketch, the success of which, both critically and commercially, led to a decade of that shit, despite near-instant diminishing returns.

I’m not afraid to admit that I loved Wayne’s World, with its leads who were my age or older, playing younger with nothing but shag haircuts, fourth-wall breaking and massive self-knowledge. In any event, at the beginning of the — you know what? I’m not going to explain the scene. Or the song. I mean, seriously, what the hell could I add to your understanding of “Bohemian Rhapsody,” the song?

In any event, at some point during the watching of that scene that I had a realization: nothing ever goes away. Part of it was technological: the ability to preserve our popular culture had gotten much better in the previous two decades, and so all of the various films, TV shows, songs and books that had been lost from even just a couple of decades prior, were sitting out there.

And given that popular culture had also expanded to 24 hours — you could stay up all night watching TV, listening to the radio, or even watching films — it meant that programmers had to find things to fill that time, and so older things competed with new things on a regular basis, and indeed, got their own outlets: classic rock stations, classic movie stations and sections at video stores, entire TV networks dedicated to old TV shows.

This had been happening throughout the 1980s, but it took the “Bohemian Rhapsody” segment in Wayne’s World to crystallize it in my head. Now, of course, it’s just gotten worse — even with the issues surrounding old films on Netflix, Disney’s tendency to hoard their releases, and the nagging incompleteness of Spotify & Apple Music — there are zillions of choices all of the time.

And see, I could thematically drag this back to “Bohemian Rhapsody” itself by noting that it seems like a song where Queen made a zillion choices and decided to put every single one of those choices into the same song. Or maybe, it’s that they made no choices and and so decided to cram a zillion things into the same song. Either way, it’s a tribute to the song’s enduring popularity that both the official video on YouTube and the stream on Spotify both have over a billion plays.