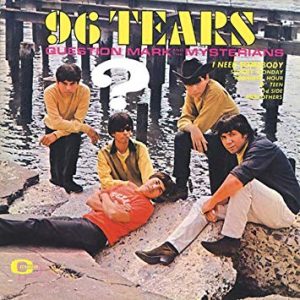 And so we had massive garage-rock singles like “Time Won’t Let Me” and “Dirty Water” and “Psychotic Reaction,” culminating with the majestic “96 Tears,” which made it all the way to number one, one of the most grit-filled songs ever to make it number one, especially in the bluesy vocals of ?, aka Rudy Martinez, the lead singer of this teenaged band of Mexican immigrants who hailed from the unlikely place of Bay City, Michigan.

Of course, it wasn’t ? who made “96 Tears” so awesome, but rather organist Frank Rodriguez, who pummels his Vox Continental organ to within an inch of it’s life, playing a primal, bone-shaking riff to anchor the song, but then doubling and tripling it, or circling around the rest the song. Rodriguez is so utterly fire here that you might not even notice that “96 Tears” is a deeply mean song, especially when Rodriguez backs away for the bridge, which is all ?.

And when the sun comes up, I’ll be on top
You’ll be right down there, looking up
And I might wave, come up here
But I don’t see you waving now
I’m way down here, wondering how
I’m gonna get you but I know now
I’ll just cry, cry, I’ll just cry

So I guess at some point they’re both crying 96 tears, which of course, is awesome because of the specificity of the number of tears. Like not 95 tears, nor 97 tears, but 96. Which of course, is too many. But 95 isn’t too many? How about 94? What, exactly, is the threshold for too many teardrops? And of course, there has long been the story that the original title was the much nicer “69 Tears,” which Martinez has consistently denied, but c’mon, that’s always what everybody instantly thinks when this song comes on, right?

In any event, 1967 would mark the year that rock ‘n’ roll would start turning away from garage rock and more towards, er, art and shit. So not only was “96 Tears” the commercial high-water mark of garage, it was kinda the last gasp as well, at least in terms of popularity, though the genre lives on even today.