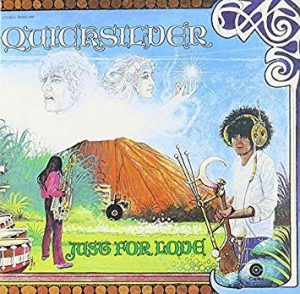 Even though I’ve heard it a zillion times, I still couldn’t tell you the lyrics of “Fresh Air,” because it’s appeal to me is really about two things: the long jams and the massive massive chorus, which is utterly indelible.

I think I love this chorus because the whole song comes to standstill every time they sing “have another hit!” It’s like they’re all stopping the song to do just that, so we might as well, too!

In between the verses, John John Cipollina took a couple of long guitar solos, and the always amazing Nicky Hopkins — who was an actual band member for a couple years — had a long piano solo, the cumulative effect of which pushed “Fresh Air” over five minutes, and was probably one of the reasons that it stalled at #49 on the pop charts, which I found surprising, because it’s always seemed like a bigger hit to me.

“Fresh Air” also contains one of my all-time favorite musical moments, a variation on the chorus, which Valenti does a couple of times, but you know the one I’m thinking about. It comes just before Nicky Hopkins piano solo, and it goes like this.

I don’t know why I love that so much, maybe Valenti’s phrasing, maybe the fact that the rest of the guys are still singing “fresh air”, maybe because I’ve always been a California boy and just got kick out of it. Either way, it was probably listening to the song just to hear that part again which brought me into it as a whole. Have another hit!!!