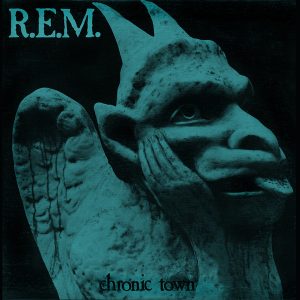 There aren’t any recordings, maybe a long-lost practice tape, but we did do originals: some of which were Joe’s and some of which were co-writes with him and I, and at the very least, being in that band spurred on my lyric-writing, which definitely helped me in other bands for the next several years. But I still wasn’t that great of a singer, as would have no doubt been evident had you ever heard me sing the one song I remember us trying to cover, “Gardening at Night.”

Which makes sense: over the years “Gardening at Night” — which Michael Stipe has said was their first real song, and was even based on a real dude who gardened at night — has turned out to probably be the most enduring song from Chronic Town. Hell, they even named their publishing company “Night Garden Music.”

As the second song on the “Chronic Town” side of Chronic Town, “Gardening at Night” had a lot of heavy lifting to do. It needed to continue the momentum from “Wolves, Lower” and establish once and for all who and what they were. Which it does in spades.

At the same time, “Gardening At Night” was probably the most musically straightforward song on Chronic Town, Peter Buck mostly sticking with basic chords — except for the opening and the bridges — which turn over themselves in perfect formation, over which Michael Stipe sung his cryptic lyrics at the top of his register, which made it slightly easier for me to make out the words he’s singing. But just slightly. And only during the verses.

But after that, of course, it was catch as catch-can, outside of “they said it couldn’t be arranged,” — probably the most thrilling part of the song, as it comes out of the more quieter bridges — of course, and the weird high-piched wails at the end, which brought “Gardening at Night” to a close.

I called “Gardening at Night” the most enduring song from Chronic Town, which some of you will definitely disagree with, but there was no doubt that was the most malleable: not only did they release a version with a more “normal” Stipean vocal on the 1988 IRS best-of, Eponymous, there was also a slow country version — recorded for Reckoning, apparently — that I first found on a bootleg in London in 1992 but eventually got released on 2006’s IRS best-of, And I Feel Fine.

As as for The Exploding Neon Kittens? We never even played a show, which was probably for the best.