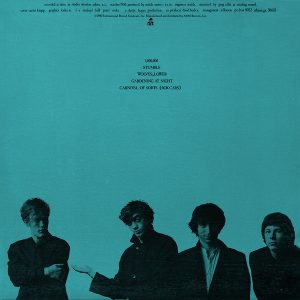 First off, it never had a proper CD release. Instead the five songs were stuck at the end of the CD version of the odds-and-sods Dead Letter Office, which was . . . OK, I guess, except for the fact that sticking a sonically coherent quintet of songs at the end of a CD otherwise filled with experiments, pisstakes and covers was kinda weird. Even at the time, I would have preferred a standalone CD release.

And while you can now stream Chronic Town as its own thing on various streaming services, it very conspicuously was left off / ignored as R.E.M. started doing their series of 25th anniversary reissues, which started in 2008 with Murmur and has never looked back.

I guess it’s possible that there just wasn’t enough material to warrant a 25th anniversary reissue — though as a hardcore fan, I would still be curious as to what other studio recordings — “Ages of You,” “All The Right Friends,” the original “Radio Free Europe,” etc — from the pre-Murmur era would sound like all smushed together, but alas, it ain’t gonna happen.

Luckily, in late 1982, as I obsessively listened to Chronic Town over and over — which, remember, meant turning the record over after only about ten minutes — all of that was in the future. And in fact, R.E.M. was just one of several life-changing things that was happening to me in the autumn of 1982, because KFSR had also finally gone on the air, and I was fulfilling a long-held dream of being an actual disc jockey, playing actual music on the actual airwaves for actual listeners.

It was cool and weird, and I couldn’t get enough of it. And one of the things that I remember is that while we were basically free-form, there was still a suggested playlist, and I seem to remember that the song from Chronic Town that was suggested was “Carnival of Sorts (Box Cars).”

It was a very long time ago, and was an incredibly weird time on multiple levels, but, it also made sense, because “Carnival of Sorts” (Box Cars)” was yet another perfect encapsulation of R.E.M.’s garage-rock past and their more mysterious near-future. And while all of the songs on Chronic Town were uptempo, somehow “Carnival of Sorts (Box Cars)” was slightly uptempo-ier.

Of course the genius.com version of these lyrics are somewhat different from what I’ve always heard, but you will tear have to tear “chronic town, poster torn, weeping will” from my cold dead brain, because that’s what I’ve been singing for 37 years.

And then there’s the utterly thrilling chorus, which has so much going on.

First you have Bill Berry ramping up the excitement by double-timing underneath the second “gentlemen don’t get caught,” leading into a great quick drumroll that sets up the second half of the chorus. Then you have the fantastic call-and-response-and-call where Berry and Mike Mills breathlessly interject “are pulling” at exactly the right moment. Finally, you have Stipe holding the final “townnnnnnnnnnnnnnn” at the end the chorus.

This level of vocal arrangement, I would argue, was one of the things that immediately set R.E.M. ahead of their peers: the blend of Stipe, Mills and Berry — Peter Buck famously wouldn’t or couldn’t sing — was totally unique and instantly classic, and they would use that blend in countless thrilling ways over the next 15 years or so.

At the end of “Carnival of Sorts (Box Cars),” Stipe sings alone:

With Bill Berry ramping up the double-time again but not letting it go, the ending of “Carnival of Sorts (Box Cars)” was well and truly thrilling — easily the most thrilling moment on Chronic Town — with only the fact that they decided to fade it slightly detracting, especially when you listen all the way through the fade, you can hear it end.

In any event, while I’m not writing about either of the songs on side two of Chronic Town — “1,000,000” and “Stumble” — rest assured that Chronic Town ranks with my all-time favorite EPs, just ahead of Pretenders Extended Play and the Clash’s Cost of Living EP.

And, as you can imagine, it well and truly whetted my appetite for more R.E.M. music, so when read in Tower Records Pulse! magazine that their debut album, called 1,000 Gifts — a reference that I cannot source anywhere on the internet except for something that I wrote back in the early 1990s and published back in 2008 — was due out at anytime, I was incredibly excited. But more on that tomorrow.