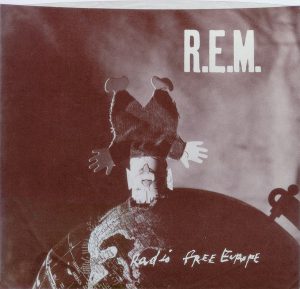 Of course, it was the lushness and sophistication of Murmur that ultimately was so delicious: you could get lost in the details of the songs, and I soon discovered that every time I finished listening to it, I immediately wanted to listen to it again, which drove everybody around me totally and utterly nuts. But I couldn’t get to the bottom of it, and now when I listen to Murmur, it sounds like the goddamn Beatles to me.

And that’s from the start, with the opening track, “Radio Free Europe.” Now, as everybody knows, they originally recorded and released “Radio Free Europe” in 1981, and while it’s all post-punk lightspeed jangle, I’m not get all hipster on you and claim that I prefer it to the Murmur version, which is both (slightly) slower and (definitely) weirder.

But of course, the Murmur version has the logistical advantage of being both the opening track and sonic avatar of — have I mentioned this? — one of my most cherished records, and as such, there’s a still a blood-quickening thrill at hearing the weird electronic pings bouncing down a ramp right into a Bill Berry snare drum 1-2-3-4, after which Michael Stipe jumps right in.

For the verses, Peter Buck and Mike Mills are in virtual lockstep, with Mills way up front while Buck strums chords underneath. But then, on the pre-chorus, they separate: Buck veers towards jangly arpeggios, while Mills goes out for a run, providing one of the songs’ major hooks.

Underneath it all, of course, is Bill Berry, accenting words, doing little fills, moving ever forward, his backbeat steady as she goes. But, of course, the first time around, they don’t quite get to the chorus, instead sticking a second verse, so maybe you initially think that maybe “radio station / inside yourself” is the chorus, but then with a couple of cymbal/snare bashes by Berry, “Radio Free Europe” transforms into almost an anthem as it glides into its actual chorus.

With massive echo on Stipe’s vocals on the “calling all me” part and the rest of the band filling in the “Free Europe” part at the end of the chorus, it was instantly and forever memorable, even if they did something different each time afterwards, like after the second chorus, going into an unexpected bridge, which features Mike Mills doubling his bass with the left hand of a piano, before gearing for the final two choruses.

It’s at this point where my favorite thing in the song happens. Probably yours, too. Buck and Mills drop out for a second, or an infinity, and then Bill Berry does one of this trademark fills — bap! bap! bap! bap! badadadaldaldap! — over which Stipe finally sings “free Europe!” at the end of a chorus. It’s such a smart, simple thing, and gives you something to look forward to each and every time you hear the song.

What did it all mean? Does it even matter? When the song sounded this great, the melody was that compelling, it was just fun to sing “radio free Europe” over and over again.

With the help of a video — the original version of which was essentially the band wandering around the gardens of Howard Finster, the official version cut with some performance footage interspersed and the second verse totally gone — that got some MTV love, and of course massive college and even some commercial airplay, “Radio Free Europe” dented the bottom of the Billboard singles chart, the best any of their singles would do here until their breakthrough in 1987.

It might have done better, but the timing was weird in terms of giving it any kind of push: Murmur came out in April of 1983, but “Radio Free Europe” didn’t come out until July, and the appearance to promote it on Late Night With David Letterman didn’t come until October. And of course, their fine performance “Radio Free Europe” was totally overshadowed by the fact that they also did a brand-new song. But we’ll get to that in a week or so.

In any event, I was one of the people who bought the “Radio Free Europe” single, not to push it up the charts as much to get the b-side: a live acoustic in the studio (with Mitch Easter) version of The Velvet Underground’s “There She Goes Again,” which just seemed so fucking cool in and of itself.