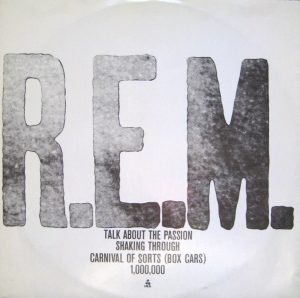 Or at least mine: that guitar riff is like a lost transmission from a distant civilization that only communicates with 12-string Rickenbacker guitars. And here is what I (a non-French speaker and brain genius) have always interpreted what that civilization was saying to us.

It’s at this point where “Talk About The Passion” does a weird thing: it goes straight into the chorus.

During the chorus, the central riff disappears, replaced by an army of acoustic guitars and Peter Buck singing harmonies — “talk about the pass-shion” — with his 12-string. No need for Bill Berry or Mike Mills, because his guitar is so spot-on.

After that, there’s a repeat of the first verse. One of the interesting things about Murmur is that Stipe didn’t write a whole bunch of words for each song, but he’d mix-and-max the words he did write. Except instead of going to the “not everybody can carry the weight of the world” bit, they added a pre-chorus, with yet another amazing guitar lick, Bill Berry pounding his toms and Michael Stipe apparently singing:


At which point they launch into another chorus, this time with the addition of ghostly backgrounded “ahhhhhhhhsss” from Berry & Mills, which then leads into an instrumental bridge featuring a fourth amazing Peter Buck guitar part as well as the subtle introduction of a cello, played by a member of the Charlotte Symphony Orchestra, the name of whom seems to be lost to the mists of time.

After that, Stipe leads off the third verse with “not everyone can carry the weight of the world” because why not?

And at the end, which the cello providing counterpoint and Buck’s guitar singing harmony, Stipe sings:

“Talk About The Passion” is an absolute stunning song, both breathtakingly simple and breathtakingly lovely, but also structurally weird enough to have an edge, which is probably why it totally stiffed as a single everywhere but college radio, where — like the rest of Murmur — it totally dominated. Or at least in Fresno, it did.

Somewhere in his massive tape vaults, Nate has a tape from the awful summer of 1988, recorded at the end of one of the massive Love Train parties where we’re singing along with “Talk About The Passion” after many hours of many substances. Given what I remember about that night all of these years later, I’m very glad that I’ve never heard it, and honestly, I’m pretty sure it should be burnt.

“Talk About The Passion”