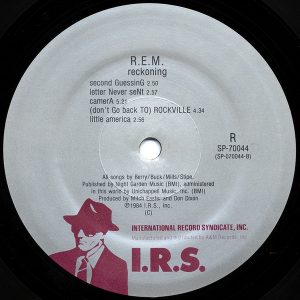 And out of all of his drum parts, my favorite — which I’ve stolen plenty of times — might just be on the verses of “letter Never seNt,” the lovely second song on the R side of Reckoning. Against a rubbery Peter Buck guitar riff and countered by a off-and-on Mike Mills bass part, Berry plays a disco kickdrum countered by offbeats on his hi-hat and the occasional snare whack while Michael Stipe recites the title letter.

At this point it’s all tension, but then Stipe goes “oooooooh hoooooo” several times while Berry brings his snare into every measure and Buck echos Stipe, it’s all release, especially on the chorus.

And because they’re R.E.M., after the second verse, they bring in a pre-chorus, which Mike Mills sings while Stipe does wordless “ooooh hooos”

Once again, there is so much going on in “letter Never seNt,” as Berry, Mills, Buck and Stipe weave in and out of each other musically and vocally — really, Stipe’s vocals are another instrument on this one — as the song moves through not just the verses and choruses, but the bridge, at which point Berry has launches into a standard beat which he only abandons for the final verse.

That’s one of the cool things about ‘letter Never seNt:” the way it bounces from mood to mood, beat to beat, the only thing constant is Berry moving it ever forward.

Oh, and like all of the songs on Reckoning, “letter Never seNt” was published by Night Garden music, administered in this world by Unichappel Music, Inc.