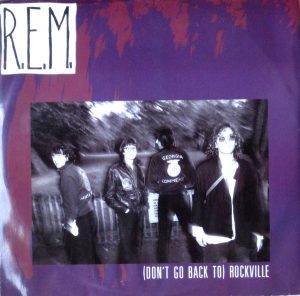 As the follow up the slow burn of “camerA” deep on the R side of Reckoning, you might have expected “(don’t Go back TO) ROCKVILLE” to go back to the more uptempo rockers that had dominated the record. But instead, R.E.M. gave us a left turn, with the most anomalous song on the whole record.

For one thing, “(don’t Go back TO) ROCKVILLE” was an older song, one of the few that survived from the pre-“Gardening at Night” period. For another thing, not only were the lyrics intelligible, they actually meant something.

Oh, and “(don’t Go back TO) ROCKVILLE” was straight-up country, which may have been an inside joke/tribute aimed at their country-loving lawyer, Bertis Downs, but at the same time also revealed some key roots for their music. Both Stipe’s drawl and Buck’s arpeggios being the most obvious, but also Bill Berry’s sparse kick drums and the harmonies, which, of course were used to great advantage on the chorus.

That chorus, man. First you’ve got the exquisite harmonies on the word “Rockville” — listen how either Mills or Berry (I think Mills) goes up at the end of “Rockviiiiiiiiilllllllllleee,” — and then you’ve got kick-drum stop-time part where a lonely Michael Stipe sadly sings “and waste another year” as Peter Buck’s guitar answers him.

“(don’t Go back TO) ROCKVILLE” was written by Mike Mills about a girl he’d been dating — Ingrid Schorr, who had some things to say about the song — and naturally part of his plea was to exaggerate both how bad he imagined Rockville to be as well what it was going to to be like when she was gone.

At night, I drink myself to sleep
And pretend I don’t care that you’re not here with me
‘Cause it’s so much easier to handle
All my problems if I’m too far out to sea
But something better happen soon
Or it’s gonna be too late to bring you back

I should point out that this was all done perfectly straight: there weren’t any winks or nods or “get a load of us doing a country song” in the performance. (Unlike a couple of the live versions below, where Stipe his the country a bit hard.) Which makes sense: there was a whole slew of underground acts doing country-oriented music — the precursor to what was called “alt-country” a decade later — Rank and File, Jason & The Scorchers, Lone Justice, so it was this was without precedent in our world. It’s really only anomalous in the context of Reckoning: “(don’t Go back TO) ROCKVILLE” is the only song on the album to feature copious amounts of acoustic guitar and piano, because if they were going to do it, they were going to do it right.

Near the end, there’s a bridge where the guy in the song admits that maybe going back to Rockville will be just fine for her actually:

It’s not as though I really need you
If you were here, I’d only bleed you
But everybody else in town only wants to bring you down
And that’s not how it ought to be
I know it might sound strange but I believe
You’ll be coming back before too long

“(don’t Go back TO) ROCKVILLE” was released as a single in 1984 and went nowhere anywhere (outside of college radio, of course), but it was a cool song to release as a single, given that it wasn’t fully representative of the album it lived on. And in fact, apparently they were so cognizant of how much of an outlier it was they’d originally planned to release it as a non-album single after Reckoning, but more practical heads prevailed.

(And in fact, after the original Hib-Tone “Radio Free Europe” single, R.E.M. didn’t release an non-album single until 1999’s “The Great Beyond,” and even that was tied to the Man on the Moon soundtrack)

That said, “(don’t Go back TO) ROCKVILLE” was an instant fan favorite, and has remained such over the decades, even as Stipe stopped singing lead on it, acknowledging the fact that it was pretty much Mills’ song.

“(don’t Go back TO) ROCKVILLE”


Jason Ringenberg covering “(don’t Go back TO) ROCKVILLE” in Ireland, 2019