The date was June 16, 1984, and from what I can tell 35 years later, several thousand people made it to the 500-person capacity Star Palace to see R.E.M. play the first stop on their Little America tour, a show that I think was added at the last second because somebody realized that KFSR had stoked enough demand to easily sell out the show. 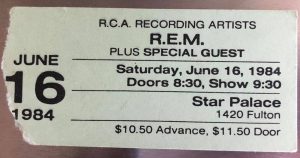 Which, of course, didn’t stop the promoter of the show — Offshore, I believe — from hooking up with KKDJ to market it. Because they’d played both “Radio Free Europe” and “so. Central Rain” a couple of times, you know. But whatever. I know that I was all outraged at the time about the evil mainstream rock station swooping in and trying to get credit, the major point was that R.E.M. was playing in Fresno! And since I had missed them in ’83 — some friends saw them in L.A. — due to being a starving college student, I’m sure that much of my complaining was performative, especially since there would have been no way to seem them otherwise, given that I was still a starving college student who had to put down a deposit on the apartment I’d just rented w/ Kirk & Rob.

Looking at the setlists on Setlist.fm and the R.E.M. timeline, I’m struck that they played four unreleased songs, and also seem to remember they played far more than the 14 songs mentioned. (In fact, I think there may have been a bootleg floating around, to boot.)

Which, BTW, is part of the fun and problem of using crowdsourced websites to try to jar loose memories: the Setlist.fm listing claims that the show as at the Warnors, not the Star Palace. As does the Wikipedia entry. Which is nothing new: I remember looking at one of those R.E.M. fansites in the late 1990s / early 2000s and realizing that they had no record of the show at all, because it was added after the official itinerary was created. I was aghast: the internet was erasing my memories!! Maybe that show didn’t happen after all.

But of course it did — and it was one of the coolest days of my life, long before the show actually started, but I’ll tell that story in a couple of days — and during the show proper, I mostly remember standing and dancing (or at least jumping) pretty much inbetween Michael Stipe & Mike Mills, and being utterly happy and utterly blown away by the show, one of the highlights of which was the closing tracking from Reckoning, “little america,” which starts out with one of Peter Buck’s all-time greatest guitar riffs and just gets better from there.

Backed by Bill Berry furiously spinning on his hi-hat while his kick and snare reliably drove the song forward, Buck’s riff was one of those sit-up-and-take-notice moments, and the cool thing was that he kept playing it after Stipe started singing . . . whatever it was that he was singing, none which was even remotely intelligible until the chorus.

The cool thing about that last line of course, is that it could have multiple meanings. If “Jefferson” is their manager Jefferson Holt, it could be as mundane as being the band being lost on their way to their next gig; or as profound as Stipe questioning the direction the band was heading in. Hell, given the fact that Stipe would start reciting the Pledge of Allegiance over the opening riff in concert, it could even be construed as their first political song in the depths of the Reagan era: (Thomas) “Jefferson, I think we’re lost.”

But once again, I spent more time listening to what Buck was doing than anything else: I’m not sure I’d ever quite heard a guitar part like that one, and while he’d definitely go back to that well a few times again, it well and truly blew me away every single time. And it also made “little america” the perfect ending to Reckoning: one last statement of their brand of rock ‘n’ roll after the balladry of “camerA” and the twang of “(don’t Go back TO) ROCKVILLE.”

Though in typically perverse fashion, they stuck a coda onto Reckoning: a jangling, tom-heavy near-instrumental that might have been a cool song in and of itself, but alas, we’ll probably never know. And if you were one of those people who lifted the needle off of the record too quickly, you might have totally missed it. ::coughs:: Jay ::coughs::

Boosted by the concert, Reckoning pretty much owned 1984 in our little world, easily winning the 1984 KFSR DJs poll, and in fact topping my personal ballot, though by the end of the decade, it was overtaken by Let It Be, which I eventually figured out was my all-time favorite album by anybody. But, of course, we’ll get there when we get there.