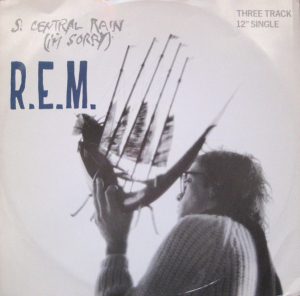 Reverend Bill Funderburk sings “He Cared That Much For Me”
Charles Surratt introduces his own composition
“On Calvary For Me”; “The Joy of Knowing Jesus”
Is a song of pure delight featuring John Barbee

But as we will see, it might be a bit more complicated than that

But first of all, here’s a weird memory quirk: 35 years later, I seem to remember hearing “Voice of Harold” before I heard “7 chineSe bros.” which is flat-out impossible from everything the internet tells me. Which are the following: until it was eventually released on Dead Letter Office in 1987, “Voice of Harold” only existed on the b-side of the 12″ version of “so Central Rain (I’m Sorry)” single, and that was released a month or so after Reckoning.

And more importantly, it was never released in America, where I.R.S. only put out a 7″ with “King of the Road” as the b-side, so we couldn’t have heard an advance promo copy: someone had to purchase it as an import. The only possibility is that Dan who specialized in rare imports (“five for the world!”) — and who sold me my favorite pink “little america” bicycle t-shirt — somehow got us an advance import promo copy. Which seems ludicrous.

So my memory is wrong, which means that I heard “7 chineSe bros.” first but I’ve always been so obsessed with “Voice of Harold” I came to think I heard it first.

Of course, both songs feature a bunch of great Peter Buck guitar licks: the opening spidery riff that occasionally resolves by what sound like a piano doubling it; the spiraling lick he plays on the chorus that answers itself, his exquisite work on the bridge. So by focusing on what Michael Stipe did on “Voice of Harold” isn’t a slight on the rest of the song, it’s just that I love it so much. 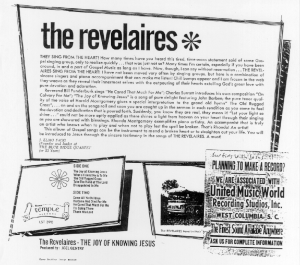 Here’s the story: apparently Michael Stipe was blocked when it came to the recording of the vocals of “7 chineSe bros.” — like “camerA” at least partially about the recently deceased Carol Levy — singing them so inaudibly that Don Dixon couldn’t get a good take. So in exasperation, Dixon dug up an old gospel album — The Joy of Knowing Jesus by The Revelaires — because he thought that Stipe would get a kick out of the fiery liner notes. But Stipe didn’t just get a kick out of them, he got inspiration, and on the next take, sang the liner notes from the album instead of his own lyrics.

On and on the songs roll on and soon you are caught up
In the sermon in each rendition as you come to feel
The devotion and dedication that is poured forth
Suddenly, you know they are real, they mean it!

But, of course, he didn’t just sing the liner notes linearly; instead he mixed and matched them to fit the phrasing and cadences of “7 chineSe bros.” and indeed if — as the legend goes — if it was one-and-done, it remains one of my most favorite Michael Stipe vocal performances ever. Especially as he goes into what would be the second chorus, where instead of singing the admittedly awesomely cosmic chorus of:

He instead sings (with Mike Mills backing vocals already in the can, apparently):

“Let your light so shine…” could not be more aptly ap-
Plied as there shines a light from heaven on your heart
Through their singing, as an artist, Rhonda Montgomery
Exemplifies piano artistry (She will return)
That’s Rhonda! An artist! (She’ll return)
This album can be the instrument to mend a broken heart

And then there’s a beat, and Stipe testifies:

Or to straighten out your life
Through the sincere testimony
In the songs of The Revelaires
A must!

I don’t know why this is so chill-inducing to me, but it totally and utterly is. And let’s not even get into the conflation of backing vocals singing “she will return” at the exact same Stipe singing about the only woman mentioned in the liner notes. That’s gotta be a coincidence, right? Right?

I mean, you can literally hear him getting unblocked as the song progresses, even snickering at “J. Elmo Fagg.” If at first, he’s just reciting the liner notes by rote, by the end of the song, he’s fully into it, now just going through not just the liner notes, but also the name of folks who worked on the record itself.

And then, as full-throated as you’d ever want him to be, having a shit-ton of fun.


He’s real. He means it. And then after quietly saying “a must / in their home” Stipe whistles the song its end and asks for another take, whereupon he presumably nails the lead vocals of “7 ChineSe bros.”

I love this so much that I realize that it’s not really fair to “7 ChineSe bros.” which is of course, a tremendous song, but also a song that might not even have existed as a full recording without “Voice of Harold.” So which came first? I’m going to go with what Dr. Manhattan “recently” realized on The Watchmen about the chicken and the egg: looks like both at the same time.