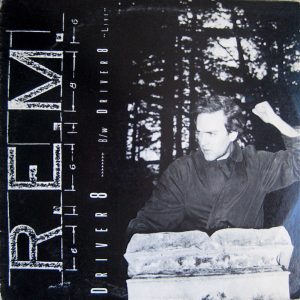 The summer of 1984 was the summer of R.E.M. Not only was there the concert at the Star Palace in mid-June, but they also became a go-to band on MTV. Obviously, not so much the videos for “so. Central Rain (I’m Sorry)” or “Radio Free Europe“, but rather appearances on some of the long-form TV shows MTV was trying to develop as antidotes to their ongoing onslaught of music videos.

So on July 17, 1984, MTV broadcast a show that was called Rock Influences, their attempt to try and tie the current music scene with the past. R.E.M. was on the very first episode, which was about folk-rock. I can’t remember how many they ended up making, though a cursory look on YouTube will show you promos for episodes on prog, blues-rock and even fashion, so it was more than I remember.

In any event, the folk-rock episode featured the usual suspects: an electrifying Dylan at Newport, the Byrds, The Lovin’ Spoonful, etc, but most importantly, featured a few songs from an R.E.M. concert; the same Passiac, New Jersey concert from which I’ve posted many clips so far.

In any event, on the actual broadcast itself, besides pairing up w/ John Sebastian for “Do You Believe in Magic?” and Roger McGuinn for “So You Want to Be a Rock ‘n’ Roll Star”, they also did their cover of “Pale Blue Eyes” and played a song that wasn’t on any of their albums, which I was pretty sure was called either “Driving Rain” but might also have been called “Driver Ray.”

Then on July 27, 1984, MTV dedicated a wide swath of that month’s I.R.S. Cutting Edge episode to R.E.M., which on one hand was kinda nepotism, but on the other hand, R.E.M.!! Playing acoustically! And not all that great! But it was still awesome! Here’s what I wrote about it the first time I did an R.E.M. retrospective, way back in 1991:

Interspersed with the ragged acoustic jam was a riotous interview sequence where Peter Buck called most pop music “Cheese Whiz for the masses,” Michael Stipe said “We don’t strive to be a critics band . . . we don’t strive to be a band, hardly.” After exhorting the MTV viewers to go out and buy Black Flag records, Peter Buck wrapped the whole thing up by observing “We’re the wimpiest band I like, and I’m not all that sure that I like us,” whereupon Mike Mills added “me, either.”

Oh, and they did an acoustic version of that “Driving Rain” song, which was fast becoming one of my favorite R.E.M. songs even though I didn’t even know what it was called. SPOILER ALERT: eventually, I learned it was called “Driver 8.”

That said, MTV wasn’t the first place to broadcast a live version of “Driver 8.” Nope, that would be KFSR.

“Driver 8” kicks off with a long, arcing Peter Buck guitar riff, supported by Mike Mills bass and a solid chugging Bill Berry — who wrote the music — beat, after which Michael Stipe sings the first verse over a brace of acoustic and electric guitars.

The walls are built up, stone by stone
The fields divided one by one
And the train conductor says, “take a break, Driver 8
Driver 8, take a break, we’ve been on this shift too long.”

I’ve told this story before, and I’ll tell it again, but here’s how I’m telling it this time around. Remember way back during the “little america” post, when I talked about R.E.M. coming to Fresno? Well, I left out the most important part: Kirk & I got to interview R.E.M. Well, mostly Kirk, and it was Bill Berry, not the whole band, but still, I was there.

So here’s how it went down: obviously we wanted to do an interview with R.E.M., and obviously, it was going to be some combination of Kirk and I, and obviously, it was going to be at KFSR. Except for that last part: the way I remember it is that the promoter determined that KKDJ would get an in-studio interview — with Peter Buck! — while if our lowly college station wanted an on-air interview, we’d have to drag a tape recorder to the Star Palace, record it with a band member to be named later, drive back to the campus to play the interview, and then drive back down to the Star Palace.

And remember, this was 1984: there was no Highway 168 that went right past CSUF, there was no 180 to connect downtown to southeast Fresno, and even the freshly-built Ikeway ended at our apartment complex at Bullard, so this was a significant time investment. Which, of course, wasn’t even a question. And oh, Kirk & I couldn’t tell anyone we were doing this, either. It was better to piss everybody off by excluding them, than to piss anybody off by excluding them. So I got someone — probably Tim — to do my Friday afternoon airshift, and we went down to the Star Palace, with a pretty good cassette recorder. It even had its own microphone.

After the first verse, “Driver 8” spins effortlessly into its chorus, Berry introducing it with a couple of whacks of his snare and Buck whacking a couple of shiny chords and Mills providing backup.

With Bill Berry’s tension-breaking drum roll on “destination” setting up Bucks dark guitar swirls during the repeated “but we’re still a ways away” are so hypnotic and immersive that you might not even realize just how cool “a ways away” actually is. Actually, the whole lyric to “Driver 8” is great, especially the second verse, which sticks you right on the train 8 is driving.

So there we were at the Star Palace, maybe a bit uncomfortable, media interlopers during a band’s prep for a show they might not even have wanted to do. And while Michael Stipe pretty much ignored us — though was incredibly enthusiastic when food was brought in — though Peter Buck did offer us a beer, which I don’t think we took him up on. Oh, and we got there just as they were going to do their soundcheck, so would we mind waiting until after that to get the interview?

Wait. What? You mean we’d basically get what amounted to a private — albeit short — R.E.M. concert? We assured them it was fine. I remember this: we weren’t right in front, but rather off to the right if you’re facing the stage. But still, as they launched into “little america,” Kirk pressed the “record” (and “play” at the same time, no doubt) button, and recorded the whole thing. “little america” would have been cool enough, but then they played two new songs: one that seemed to be about a circus clown, and — otherwise would I be writing this — “Driver 8.”

Afterwards, Bill Berry gave a nice long interview, which we then took back to the station to air — blowing our cover in the process — and the week after the show, Kirk aired that version of “Driver 8,” way before either of the MTV broadcasts.

There’s also a fantastic bridge on “Driver 8,” where they country-up the beat — check out Mills’ bass runs — and add a harmonica symbolizing that train whistle you hear from miles away when you’ve got insomnia yet again as Stipe does his best singing of the song.

After that, it’s Buck amazing opening riff, one last verse — which, to my ears, ends on the wistful “fields of wheat, just look at them” — and of course a couple times around of the chorus before ending.

I know that I said “Pretty Persuasion” was perhaps the ur-R.E.M. song, but quite literally it’s pretty much all in “Driver 8,” as well — the ringing guitars, the solid beat, the cryptic words, the backing vocals. Everything I love about R.E.M. is all right there.

A Postscript: It’s the autumn of 1987, and Blackbird Stories has gotten together and actually written a bunch of songs, though I’m still using Wade’s old drum kit, and we’re auditioning Sean to be our lead singer. But rather than teach him any of our songs — not even “I Lost My Keys Again” — we make him put on a pair of headphones and sing “Driver 8” to the rest of us. Along with the album, because we sure as shit weren’t good enough to cover it. It seemed kind of mean, even at the time, but I think maybe the logic was that if he could sing “Driver 8,” then he could handle anything we threw at him.

Which, luckily, he could, and — for better and worse — we had a band. Not a very good band, as it turned out, but a band nevertheless.