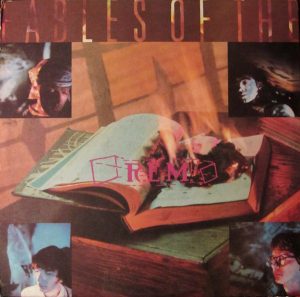 Album: Fables of the Reconstruction of The Fables
Year: 1985

It was just different, you know? For one thing, after two albums with one-word titles, here comes this one which almost sounded like it could be a concept album, like maybe a southern rock opera about the post civil war period. Which you would had to take on faith, because you still wouldn’t be able to understand the words.

Also: Mitch Easter and Don Dixon were gone; replaced by Joe Boyd, who was a generation older, and had produced folk-rock forerunners like Fairport Convention & Nick Drake, and the sound he got was somehow both brighter and sludgier, but neither as assured as Murmur nor as charming as Reckoning.

The difficult third album, indeed. And it announced its intention to be difficult from the opening notes of the opening track, with Peter Buck painfully wrenching notes from his guitar, each one acting like it would rather not emerge from the speakers, thank you very much. Meanwhile, Michael Stipe, with nowhere to hide, is almost audible, but he’s also kinda sideways, blurry and disoriented.

I fell somewhere just about every paragraph
Read the scene where gravity is pulling me around
Peel back the mountains, peel back the sky
Stop gravity in the floor
It’s a Man Ray kind of sky
Let me show you what I can do with it
Time and distance are out of place here

After the first line, Bill Berry and Mike Mills sneak in, adding to the blurriness and dislocation, as well as a cello and violin, swirling aimlessly in the background as they all spiral into the chorus.

But the first chorus provides no release, no relief, just an endless spiral down. For a band that literally named after the dream state, “Feeling Gravitys Pull” is their first song to actually invoke the disorientation of that state.

Somewhere near the end it said:
“You can’t do this”
I said “I can”
Two ships swaying, rivers shift
Oceans fall, mountains drift
It’s a Man Ray kind of sky
Let me show you what I can do with it

So it just gets doomier and doomier until the second chorus ends, and suddenly everything shifts for just a moment.

And just for those lines, with Stipe going to the top of his register as he sings “into my eyes,” it’s like an unexpected cool breeze on a hot day, just a skosh, just a modicum of relief. And then it’s gone, as the whole song is pulled to a stop by gravity itself, somehow finding a reason to start over again, ratcheting up the weariness once again.

In the end, after a second cool breeze, it’s just Bill Berry and the strings; Berry trying to find a pattern on his toms while the strings stab at him, Peter Buck barely even able to play his guitar as Stipe sings “gravity pulls me down” just before the whole song collapses around him.

I’m not gonna lie: at first, this all seemed weird as fuck. A strange way to open a record after the previous three had been opened by “Wolves, Lower,” “Radio Free Europe” and HarborcOat“. And yet, and yet, just as those songs set the tone for what was to follow, so did “Feeling Gravitys Pull,” and once I figured out what they were on about, I was once again all in.

By 1985, I’d started writing record reviews for the CSUF paper, The Daily Collegian, and by the time I’d lived with it for a couple of months, I called Fables of The Reconstruction of The Fables both “the weakest album they’d done” and “the best album of 1985.” Such was the duality of the R.E.M. thing.