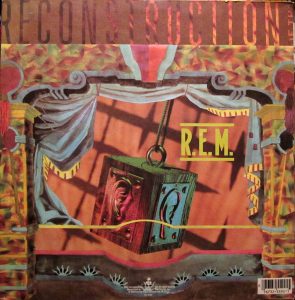 The comet is coming!!!

It was 1973, and I was still crazy for all things having to do with OUTER SPACE, and a comet called Kohoutek was supposed to totally light up the skies for my eleventh Christmas. And I was totally into it, especially since I knew I had to wait all the way until 1986 to see Halley’s Comet. 1986! That might as well be 2020!!

Except, of course, it was a total and complete bust. Fuck you, Kohoutek!!!

Fast-forward to 1985 — which, in retrospect, happened much faster than I’d anticipated — and while I occasionally remembered over the years that I got up and helped Steve with his newspaper route on Christmas Day 1973 because I thought maybe there was still shot of seeing Kohoutek, it was otherwise gone, replaced with the anticipation of seeing Halley’s the next year.

Until Fables of the Reconstruction of the Fables that is.

One of the things I haven’t mentioned is how much I love the entire visual aspect of Fables of the Reconstruction of the Fables: the southern gothic artwork with the burning book, the swinging cube, the moody band photos, all done up in lush browns and golds and soft oranges. I loved it.

And it somehow fit the music on the album, especially on “Kohoutek,” which seemed to be about a relationship gone sour — Michael Stipe was back in mushmouth mode on this one, so all lyrics are approximate.

Who’ll stand alone?
She gave it up
She wouldn’t know
Courage built a bridge
Jealous tore it down
And least its something
You’ve left behiiiiiind
Like Kohoutek, you were gone.

But I can’t tell you how much I loved the metaphor of the long-gone comet standing in for the end of a relationship, especially when Kohoutek isn’t going to be back for about 75,000 years from now.

Underneath Stipe, Peter Buck is playing approximately 10,000 12-string guitars, Berry is doing secret build-ups and break-downs and Mike Mills is adding his quick little hooks where he can. I’ll say this: “Kohoutek” is probably the song from Fables of the Reconstruction of the Fables that I’m writing about that most people will go “ehh,” but I absolutely love how the guitars continually turn over each other, and I love Stipes singing and I really really love the feedbacky bendy little guitar solo in the middle of the song, as well as the lyrics I could understand.

Michael built a bridge, Michael tore it down
If I stand and holler, will I stand alonnnnnnnnne?

In 1985, the idea of the elusive Michael Stipe referring to himself in the third person like that was kinda cool and kinda thrilling, as was his falsetto on “aloonnnnnnnnnne.” That said, while it’s always been one of my favorites, clearly the band felt otherwise, and over they years, they’ve rarely played it in concert, though they did record it in 2007 on their awesome Live at the Olympia Dublin album.

Like all of the songs on Fables of the Reconstruction of the Fables, “Kohoutek” was published by Night Garden music, administered in the real world by Unichappel Music, Inc.

Oh and the next year, Halley’s Comet was a total shitshow, not even visible in our hemisphere — a disappointment so huge that I didn’t even bother getting upset about it — so now I have to wait until I’m 100 to see it.