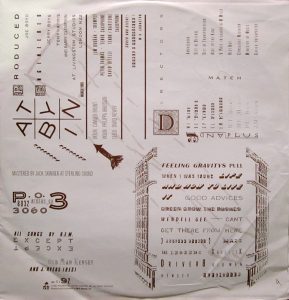 Because it wasn’t played at the soundcheck we recorded like “Old Man Kensey” and “Driver 8,” were you’d have to go looking for it to discover that the earliest-known version of “Good Advices” was played at the Star Palace show in Fresno in June, 1984. And while the crowd-sourced setlists for the 1985 Warnors appearance are woefully incomplete, history does record that they played it the next night, at the Greek Theatre in Berkeley, a show which — humblebrag alert! — Kassia & I drove up for. Because you could just drive a 500 mile round trip to see a show back then.

I don’t recall the “Good Advices” from that show, but I do recall that they did their take of Television’s “See No Evil” with Michael Stipe shouting “once upon a time there was the greatest band in the world” as Peter Buck started the still-awesome riff.

In any event, as far as I’m concerned, “Good Advices” is on the short list of Prettiest Songs Ever Recorded, R.E.M. Division, and it contains one of my all-time favorite Michael Stipe lyrics; an introvert struggling with being on the road.

“Good Advices” is in same ballpark as “Kohoutek,” “Green Grow The Rushes” and “Maps and Legends:” languid and lush, Buck’s guitars and Mike Mills bass trading riffs and licks, and gorgeous melodies, though in the case of “Good Advices,” Stipe is mostly by himself, just adding to the melancholy peeking from every line.

Who are you going to call for?
What do you have to say?
Keep your hat on your head
Home is a long way away
At the end of the day, I’ll forget your name
I’d like it here if I could leave
And see you from a long way away


There really isn’t any rest on “Good Advices,” no breakdowns, no instrumental passages, not even a real delineation between the verses and choruses, just a slow relentless moving forward, which befits lyrics that feel like they were written on tour bus, advices that feel like they were written from Stipe to Stipe. Which get even more poignant about halfway through with what I guess could be considered a bridge, but then again maybe not.

At the end of the day
When there are no friends
When there are no lovers
Who are you going to call for?
What do you have to change?
A familiar face, a foreign place
I’ll forget your name
I’d like it here if I could leave
And see you from a long way away

This is the only place where “Good Advices” changes at all: Mike Mills sings something so far down in the mix, you might even miss it, and and the second half, Buck adds a couple extra notes to add emphasis to “A familiar face, a foreign place” and then pulls them right out.

More than any of the other songs on Fables of the Reconstruction of The Fables, “Good Advices” reminds me of The Smiths, another band that could find a cool riff or two and ride it into infinity while their lead singer was being wistful. And in fact, given all of the similarities between the two bands, it was really only during 1985 that they kinda sounded like each other, as some of Johnny Marr’s riffs on the Meat is Murder and the surrounding singles sound close to R.E.M. But we’ll get there when we get there.