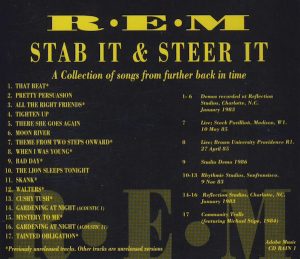 It was late June, 1992. I was in London. London, England, that is, hanging out with Tim, who was showing me all of his favorite record stores, including one in Camden Town that sold bootlegs.

Now, of course, R.E.M. bootlegs started appearing in the mid-1980s, encouraged by the band themselves, who instinctively understood that live recordings, outtakes and other ephemera weren’t bad for them, but rather, good for them. Hardcore fans weren’t going to buy the next R.E.M. album just because they had a live recording that happened to included early versions of those songs. So R.E.M. allowed their shows to be recorded, both for the radio and otherwise, and even said in interviews that they themselves bought R.E.M. bootlegs.

Thus R.E.M. bootlegs started seeping into Fresno in the mid-1980s. Not just the recording of the soundcheck version of “Driver 8,” but I remember a cassette of a live show from Boston that featured their version of “California Dreamin'” and the as-yet unreleased “Ages of You” which I think might be this one and Cindy had found another bootleg called Smokin’ in the Boys Room that had the dub version of “Radio Free Europe.”

That said, it was 1992 where I got most of my favorite R.E.M. bootlegs, starting with that afternoon in Chelsea where I bought a pair: a recording of their MTV Unplugged episode called Blue and a outtakes compilation called Stab It and Steer It.

Obviously, all of these years later, nearly all of the songs on both of these bootlegs have been officially released, but in the awful second half of 1992, they were still a novelty. I had of course, seen and taped the MTV Unplugged show when it aired, and therefore was familiar with the performances, but Stab It and Steer It was kind of a revelation, despite consistently shitty sound quality. It was dominated by demos from 1983, mixing unheard songs like “All The Right Friends,” “That Beat” and “Mystery to Me” with unexpected covers like “Moon River” and “The Lion Sleeps Tonight,” and even a pair of slower versions of “Gardening At Night.”

There were also a couple of live versions of unreleased songs like “When I Was Young” (an inferior early version of “I Believe”) and “Theme From 2 Steps Onward,” and smack dab in the middle, the demo for “Bad Day.” Which totally and utterly killed me.

A public service announcement followed me home the other day
I bade it never mind, go away
Shit so thick, you could stir it with a stick
The paper wouldn’t lie, we assume the loss to mankind and gloat and jeer with it

While “Bad Day (PSA)” is definitely in the vein of “Life and How To Live It” and “It’s The End of The World It (and I Feel Fine),” I think it stands up on its own as kind of a link between the two. Featuring a brain-bending Peter Buck guitar lick, some crazy harmonica and Bill Berry operating at warp speed, “Bad Day (PSA)” more than justifies its existence with its chorus.

Broadcast me a joyful noise into the times, Lord,
Count your blessings, ignore the lowest fear, come one, what more?

With great backing “ahhhhhhhh-ahhhh-ahhhhhhhhhhh” vocals from Mike Mills and Bill Berry, “Bad Day (PSA)” would absolutely been a boon to Lifes Rich Pageant: I for one would have preferred it to either the undercooked “Underneath The Bunker” or the overcooked “Swan Swan H,” but as it happens, this original version of “Bad Day” was the third one that R.E.M. officially released.

The first one, of course, was the single from 2003’s WB best-of, In Time. It was a brand-new recording, with lyrics updated to go after the Bush 2.0 administration, and I love it enough to write a post about it when we get to 2003, if for no other reason than to delay having to write anything about Around The Sun. And then on 2006’s I.R.S. best-of, …And I Feel Fine, they released another version from 1986, this one with weird organ and the verses and choruses stacked on each other. It was OK, but I think I was disappointed because when I saw that they were issuing a version of “Bad Day” from 1986, it would be the one I loved, but not so much.

But instead, I had to wait until 2011, when they added a disc of demos to the 25th anniversary reissue of Lifes Rich Pageant. Finally!