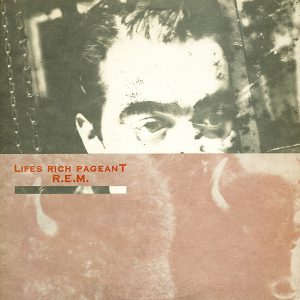 That said, the highs were so fucking high, over the years I came to appreciate just about everything on the record other than the throwaway “Underneath The Bunker,” the dull “What If We Give It Away?” and the overrated “Swan Swan H.” And of course, Lifes Rich Pageant was the last record where R.E.M. was solely ours, none of which we knew as we first looked at the weird “is that Bill Berry cover?” (Spoiler alert: yes!)

A philanderer’s tie, that murders you

“Begin The Begin” begins the begin with a twisty, near-psychedelic Peter Buck guitar lick that almost instantly transforms into a near-funky feedback laden riff that drives the song over the biggest drums Bill Berry had played to date. After each verse, the song comes to a dead stop except for that guitar lick, which starts it right back up.

Life’s rich demand creates supply in the hand of the power
The only book that matters
Silence means security, silence meets approval
Always zenith on the TV
Tiger running around the tree
Follow the leader run and turn into butter

One of the things you notice instantly is that you can pretty much understand everything that Michael Stipe is singing, a trend that started a bit with Fables of The Reconstruction of the Fables, but becomes full-blown here. The words don’t always make sense, but c’mon, one thing at a time!

And so two records were the sound of the summer of 1986: The Queen is Dead and Lifes Rich Pageant; sitting the couch of an ex-girlfriend trying to woo her new roommate while singing “Martin Luther Zen, a mythology” every single time it came up. I didn’t know what “Martin Luther Zen, a mythology” meant — I pretty sure I still don’t — but of course that wasn’t the point. The point was to develop inside jokes and bond over R.E.M.

In any event, “Begin The Begin” signaled just how thick and muscular they wanted Lifes Rich Pageant to be, exemplified by a late bridge where Stipe shouts “Example / The finest example” while Berry launches into a cowbell-driven double-time, Mills cranking up the first of many space-filling keyboard parts that permeated the record leading into a strangled scream and extra intense repeat of the first verse

In the end, Stipe asks to begin again while Buck tosses in quick noisy leads until Berry slams the whole thing shut.