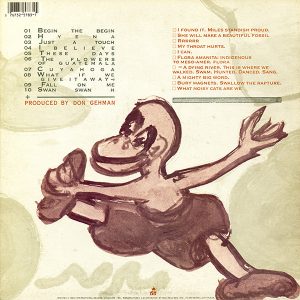 Over a pummeling Bill Berry double-time with Peter Buck just ripping notes right and left from his guitar, the opening of “These Days” is an absolute gut punch, and you have to catch your breath just to sing along with Stipe. And you gotta do it fast, because he’s right there within ten seconds of the opening after Berry eases up on the snare but not the tempo.

I’m not feeding off you, I will rearrange your scales
If I can
And I can!
March into the ocean, march into the sea
Had a hat I put it down and it sunk, reached down
Yanked it up, slapped it on my head

I kinda love how Stipe sings “morech into the ocean, morech into the sea,” and I especially love that — with Berry revving it even higher and hard, Mills right there on the harmonies — this heretofore (outwardly) apolitical band sings a chorus that is as rabble-rousing as they had yet got.

All the people gather
Fly to carry each his burden
We are young despite the years
We are concerned, we are hope despite the times
All of a sudden, these days, happy throngs, take this joy
Wherever, wherever you go!

For a world-weary (ha!) 23-year-old, this was a fucking thrilling chorus. I mean, it would have been had it been the usual surrealistic imagery, but hey! I was young despite the years. I was concerned. I at least wanted to be hope despite the times.

You know the times: 1986 was still deep cold war, our President trading arms for hostages (not funny) and joking about outlawing and nuking the Russkies (OK, kinda funny). Just like I can imagine climate change hangs over every single young person these days, nuclear war still hung over us, always there in the background of every day and every action.

So consider this rabble roused, and in the very next verse, amused when Stipe challenges “we have many things in common, name three” and the other guys answer with a piss-taking “Three! Three! Three!”, presaging the fact that they got funnier as they got more political.

There’s a quick instrumental bridge in “These Days,” really just so everybody can take a bit of a breather, and fuck around with some percussion instruments while Stipe randomly grunts and Buck reminds us that he can still jingle-jangle-jingle, but then they fire up the engines and “These Days” rages until the end.