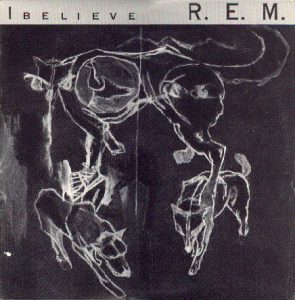 In any event, one of the fun things about being an R.E.M. fan in the 1980s was wading through all of the weird things they — presumably Michael Stipe — would do with the packaging of their records. I’ve already mentioned the ongoing changing of the administration of their music publishing (which on Lifes Rich Pageant was “Administered: Many Worlds Inclusive”), but one of the more interesting pieces of ephemera was the tracklisting on the inner sleeve of Fables of The Reconstruction of the Fables, where one of the songs mentioned was called “When I Was Young.”

Naturally, the mention of an unheard song intrigued me, but there wasn’t much I could do about it but wait and wonder. I course, I only had to wait a year or so, as one of the key tracks of Lifes Rich Pageant was clearly an updated version of it, and I’m glad they waited, because “I Believe” had one of my favorite Michael Stipe lyrics to date.

With Peter Buck setting the mood with a quick banjo introduction that explodes into a full-blown classic R.E.M. song — guitars jangling every which way, drums moving ever forward, sneaky bass hooks — “I Believe” feels like an intro to the next generation of R.E.M songs, especially on the amazing first verse.

I believe in coyotes and time as an abstract
Explain the change, the difference between
What you want and what you need, there’s the key
Your adventure for today
What do you do between the horns of the day?

There is so much awesome here, especially in the second half of that verse: “I believe in coyotes and time as an abstract” makes no linear sense, of course, but it makes all kinds of emotional sense to me. Or maybe it just sounds cool. Meanwhile, he’d back to on the difference between “what you want and what you need” on “Finest Worksong.” And finally, there’s “between the horns of the day,” a transcription error that once again made more sense because it was less linear than the original “hours” he’d written.

And then it all came together on the glorious chorus, Mike Mills and Bill Berry — and maybe half of the South, for good measure — harmonizing (and Berry doing some killer fills) on the chorus.

Boom. There it was: no abstraction, no obscuring, just a simple plain statement of a grammatically incorrect fact: change is what I believe in.

But he was just getting going.

Trust in your calling, make sure your calling’s true
Think of others, the others think of you
Silly rule golden words make
Practice, practice makes perfect
Perfect is a fault and fault lines change

Listen closely and you can hear Peter Buck alternating his trademark arpeggios with rising chords during that verse, but if you’re like me, you’re enjoying the confluence of Stipe’s invocation of the Golden Rule with his stream-of-consciousness wordplay: “Practice makes perfect, Perfect is a fault and fault lines change”, especially the backing harmonies when he belts out “chaaaaaaaaaannnnngge”

And then there’s an accordion solo. Because why the hell not? Well, technically, it’s not much of a solo, just Mike Mills (presumably) adding some color to the song, which always led to an somewhat awkward moment in their live shows, where Peter Buck didn’t really have anything to play there — if he had, no accordion solo — but it’s a pretty short section, and after another chorus, one last verse, pretty much the same as the first, except that Stipe ends it with:

I believe in example, I believe my throat hurts
Example is the checker to the key

before going into one last chorus, the one where he believes that “the poles are shifting” — which I took to mean that we were moving away from the reactionary Reagan years in which we were currently ensconced — before bringing “I Believe” to an end.

On the live versions from 1989 — forever memorialized in Tourfilm, but my favorite is from a bootleg from Orlando on 4-30-1989 — at the very end of the song, Stipe holds the “I” of the last “I believe” way too long on purpose, so it’s “iiiiiiiiiiii-hiiiiiiiiiiiiiii-iiiiiiiiiiiiiiiiiiiiiiiiiiiiiiiiii” until his voice completely breaks, while he grasps just enough breath to croak out “change is what I believe in.”

I love that live version so much that I almost wrote about it instead of the studio version, but either way, it’s an utterly remarkable song.


“I Believe” from Tourfilm (muddy sound)