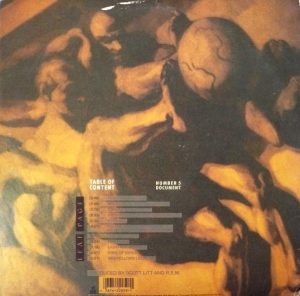 From that moment on, “Disturbance at the Heron House” became one of my favorite R.E.M. songs, even though it was dismissed by Bill Berry as a slowed-down “Gardening at Night” And hey, and maybe that’s the reason I love it so much: it’s the most early-R.E.M. sounding song on the record, starting with the bendy, circular guitar riff that Peter Buck uses to anchor it. Oh, and the jangle he lays out under the verses.

I was this many years old when I discovered (or remembered) that “Disturbance at the Heron House” was Stipe’s conflation of Animal House and the feeling of hopelessness he felt during the Reagan years. OK, but what I really loved were the harmonies (and the phrase itself) on “The followers of chaos out of control”, and pretty much all of the chorus.

After the second instance of that chorus, Buck swoops in with a highly-aggressive guitar solo, all twisty and spinny and completely unexpected which jumps back into his his main guitar riff and one more verse.

At this point, “Disturbance at the Heron House” — which by the way, like all of the songs on Document (except for their cover of Wire’s “Strange”) was administered in all words by Unichappell music — starts getting disjointed, vocally, as Michael Stipe and Mike Mills and Bill Berry all sing the outro chorus not quite together, but not quite apart, either.

And as Berry and Mills melt away, vocally, Stipe repeats “everyone allowed” over the central riff until the song just ends.

It goes to how much R.E.M. liked this song that it was one of the songs they pulled out from Document for the acoustic sets they did in 1991, including the Mountain Stage & MTV Unplugged performances.

“Disturbance at the Heron House”


Disturbance at the Heron House on Mountain Stage, 1991