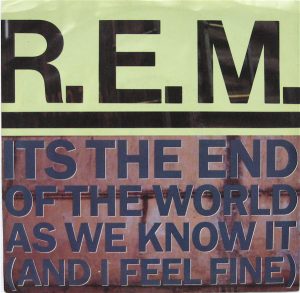 That’s great, it starts with an earthquake
Birds and snakes, and aeroplanes
Lenny Bruce is not afraid

I realize that it stiffed as the follow-up single to “The One I Love,” and I also realize that it’s become so ubiquitous, such a go-to punchline that you might not realize how instantly iconic it was when it was released in 1987, the last song on the great first side of Document.

World serves its own needs, don’t misserve your own needs
Speed it up a notch, speed, grunt, no, strength
The ladder starts to clatter with fear of height, down, height
Wire in a fire, representing seven games
And a government for hire and a combat site
Left of west and coming in a hurry
With the Furies breathing down your neck

And in fact, in my own little circle of friends, now approaching — or gasp! even hitting! — our mid-20s, it got into our heads so much that it became a running joke that the world was going to end on January 1, 1988. Look I know that this seems utterly ludicrous now, given that every week contains about thirteen years worth of stuff, and it seems like the world could end every single godsdamned day, but our theory was that our lives were getting so accelerated as 1987 came crashing to its end that there would be no other choice but for the world to collapse upon itself after the year ended.

Team by team, reporters baffled, trumped, tethered, cropped
Look at that low plane, fine, then
Uh oh, overflow, population, common group
But it’ll do, save yourself, serve yourself.
World serves its own needs, listen to your heart bleed
Tell me with the Rapture and the reverent in the right, right
You vitriolic, patriotic, slam fight, bright light
Feeling pretty psyched

Of course, this was all incredibly tongue-in-cheek: nobody seriously expected the world to end on January 1, 1988; it was just a running joke among a bunch of young people who truly didn’t know what their futures held. But it was also, I think, a tribute to this song, as well as R.E.M., who’d been the soundtrack to many of our lives for most of the decade, and while it seemed like it was going to last forever, it really wasn’t.

So maybe subconsciously, most certainly subtextually, it wasn’t so much about the world ending, but our world ending — as we knew it — the delicate set of circumstances that brought our circle of friends together in the first place. It was always going to end, because things always do.

Six o’clock, TV hour, don’t get caught in a foreign tower
Slash and burn, return, listen to yourself churn
Lock him in uniform, book burning, blood letting
Every motive escalate, automotive incinerate
Light a candle, light a votive, step down, step down
Watch your heel crush, crush, uh-oh
This means no fear, cavalier renegade and steering clear
A tournament, a tournament, a tournament of lies
Offer me solutions, offer me alternatives
And I decline

Supposedly evolved from “Bad Day (PSA)” — though, outside of the opening Bill Berry machine-gun drumrolls, I’ve never heard it — “It’s The End of The World As We Know It (And I Feel Fine)” is a stream-of-consciousness rant which almost instantly hits full momentum as Stipe rattles off words and phrases and images that might even mean something, but don’t have to, either. It’s, of course, their version of “Subterranean Homesick Blues,” but of course pumped up for the much faster 1980s.

With a song this purposely overstuffed, you really have two choices: either try to figure out every single meaning or just let it wash over you like a wave, catching what you can and not worrying about what you can’t.

But, of course, being R.E.M., they can’t help themselves, and they wrote of their catchiest choruses, which is basically the title broken down and repeated over and over. Which, after the second verse, they top, by adding a commentary to it. Let’s all sing along, shall we?

Oh, and did I mention that it rocks the fuck out? Especially as it gets going and Mike Mills adds piano and organ, Peter Buck piles on the guitars and they multitrack Michael Stipe into his own wall of voices as they zoom into the third verse. You know, the one with the stop-time.

The other night I dreamt of knives, continental drift divide
Mountains sit in a line
LEONARD BERNSTEIN!

After that, it could all just be gravy, but they have one last trick: letting the song collapse into into a multi-textured folk-rock title hook chorus before being rescued by Peter Buck’s stinging guitar. Even all these years later, “It’s The End of The World As We Know It (And I Feel Fine)” remains scary, cynical, apocalyptic, and just plain fun.

And it’s that last quality that endures: it’s just one of the most funniest songs that anybody has ever recorded, pure joy from start to finish. And, needless to say, always an absolute joy to see live, which is why, for the rest of their career, it was a natural last song or encore, with Michael Stipe often taking the “time I had some time alone” part at the very end.

Spoiler alert: the world didn’t end on January 1, 1988, even though that New Years Eve was one of the wildest and most memorable ever it very well could have and nobody would have even noticed. Ours did, eventually, though social media has given it a weird afterlife. Which feels fine.