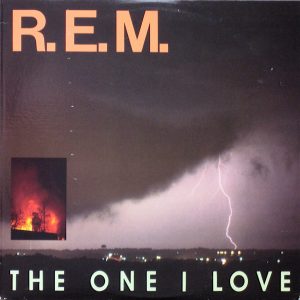 How did this even happen? Why “The One I Love” instead of “Radio Free Europe,” “So. Central Rain,” “Driver 8” or even “Fall on Me?” I guess that the conventional wisdom has always been that people were fooled by the opening line and thought it was a conventional love song.

This doesn’t really scan with me. Because if you listen to literally any of the other words on the entire song, you realize that the guy in the song is a complete and entire dick. I mean, “a simple prop to occupy my time.” What an asshole!

In fact, insomuch as the lyrics of “The One I Love” contributed to its popularity, I think that people enjoyed it in the same way they enjoyed the nastier Stones songs, like “Brown Sugar:” either as fantasy, or by ignoring the literal meaning of the lyrics and instead just getting their pleasure from the music.

And in the the case of “The One I Love,” that’s a whole lot of pleasure. Starting out with Peter Buck’s inversion of Neil Young’s “Hey Hey My My” riff, “The One I Love” straddles the line between totally fresh and weirdly familiar, but with Bill Berry’s great drum rolls buttressing it, it utterly grabs you.

One of the things that is often overlooked about “The One I Love:” it’s quite dynamic. After the big opening, the first verse is relatively quiet, just a couple of jangly guitars underneath Michael Stipe as he sings about his simple prop. Which is another reason I don’t think that people mistook this for a love song.

It’s not until the chorus where it gets big again: augmented by a couple of ferocious Berry snare rolls, Stipe bellows “FIIIIIIIII–EEEEEEERRRRRRRRRRRRRRRRRRRRRRRRRRRREEEE” at the top of his lungs as Buck starts the central riff up. The second time — after a repeat of the first verse — they get to the chorus, Mike Mills comes in with a counterpoint, which I’ve always heard as “burning down, ooohhhhhhhhh” but the internet tells me is “Coming down on her own, now”. Either way, it’s an effective counterpoint, and almost instantly leads into a fiery Buck guitar solo.

Which means they’re all set up for the final verse, which makes the whole song even more explicit.

Just fucking brutal. Especially the pause Stipe leaves between “left” and “behind” — an utterly savage bit of phrasing which somehow is even meaner than “another prop has occupied my time.” . Once again, how can anybody mistake this song for anything but utterly vicious?

In mid-November 1987, Kassia, Cindy & I drove up to Oakland to see R.E.M. at the Oakland Coliseum arena. It was part of my 25th birthday weekend, which had opened the night before with the Miss Alans at the Blue and would close the next night w/ U2 at the outdoor stadium. And so, smack dab in the middle was R.E.M. (and the dBs!), who, unlike the make-up gig they’d done the previous year, had the proper equipment to fill an arena rock show, and did just that, one of the highlights being “The One I Love,” during which the first verse was just Stipe and Buck, holding back Berry and Mills until the first chorus.

In any event, augmented by a video that got a lot of traction on MTV, as well as a bunch of airplay on rock, college and top 40 radio, “The One I Love” — which, remember, was still technically an indie song — made it all the way to #9, the first of a handful of singles that cracked the top ten.


“The One I Love” official music video

Administered in all worlds by Unichappel music.