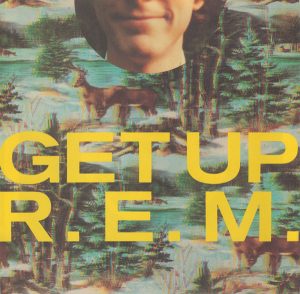 In the end, given that Green was intended to be experimental — when I’m sure that Warners would have preferred a dozen variations of “The One I Love” — the good news is that most of the experiments worked, like the organ-drenched garage-rock dreamsong, “Get Up.” Given that they literally named themselves after the dream state, it was surprising that “Get Up” was (I think) their first song about dreaming.

And naturally, given that it was about dreams, “Get Up” is slightly off-kilter and not quite in our reality. Whether it was Mike Mills incessant exhortations of “get up” — ironic, because Stipe wrote the lyrics because he was annoyed with Mills sleeping late during the Green sessions — or the metallic-sounding guitar scrapes from Peter Buck bouncing off of the handclaps (!), “Get Up” was weird and cool.

And, of course, I’m always in the market for an anti-sleep song, especially when it’s got a drum-driven contradictory chorus, with the drummer bringing up the contradiction.

Of course, outside of the context of a song about sleep, the concept of dreams simultaneously complicating and complementing your life is massively philosophical, which is probably why I love “Get Up,”: it’s not just about the dreams you have when you’re sleeping, but the dreams you have for your life, as well.

But that’s probably all subtext at best, because after the second chorus, over a wall of ahhhhhhhhhhs, Stipe moans “dreeeeeaaaammtiiimmmmme” and the song collapses into a short musique concrete section of overlapping musical boxes — taken directly from a Bill Berry dream.

“Get Up” was the final single released from Green, and unlike the previous three — “Orange Crush,” “Stand” and “Pop Song ’89,” it went absolutely nowhere on either the pop charts or the radio.

“Get Up” Official Music Video