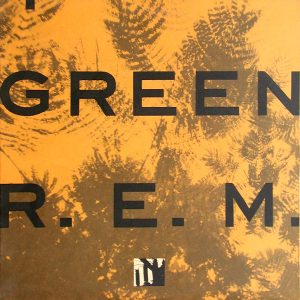 The final time I saw R.E.M. in the 1980s — because it was 1989, and they literally couldn’t have any more 1980s tours — was once again at the Oakland Coliseum Arena, and this time, it was a much smaller roadtrip, because everything seemed different by 1989, but they were once again great. As were openers Robyn Hitchcock & The Egyptians, featuring a second guitarist called Peter Buck.

Buck, always restless despite R.E.M.’s relentless album/tour cycle, had played on Hitchcock’s 1988’s Globe of Frogs album — check out his shimmering work on future Certain Song “Chinese Bones” — the first flush of an off-and-on collaboration that I’ll explore more fully later this year when I get there.

I also recall that we saw Robyn Hitchcock do an in-store that morning at a record store — Tower? — in a strip mall south of San Francisco, but even as I’m writing this, it seems like that might have been a fever dream.

But not as much of a fever dream as “I Remember California,” the doomy penultimate song from Green.

With Bill Berry playing rolling the beat on his toms as Mike Mills circles like a vulture, “I Remember California” is cut from the same cloth as “Feeling Gravitys Pull,” minus the dissonance but adding goth-like guitar and synth washes. I like “The Earthquake Song,” or even “After The Gold Rush,” it gave me flashbacks to my childhood reading the destruction of California sequence from The Last Days of The Late Great State of California.

Low ebb, high tide
The lowest ebb and highest tide
A symbol wave I must confide
I guess we took us for a ride
I guess it’s just a gesture

In the end, “I Remember California” becomes a tidal wave itself, washing over everything in its path in a wave of rumbling drums, burbling bass, blue dragonfire guitar and Michael Stipe & Mike Mills harmonies as they chant “at the edge of the continent” until they get washed over straight into the fade.

After the moribund midsection of Green, “I Remember California” felt like return to form, a truly great song that also really didn’t sound like anything else they’d ever done.


“I Remember California” from Tourfilm, 1989