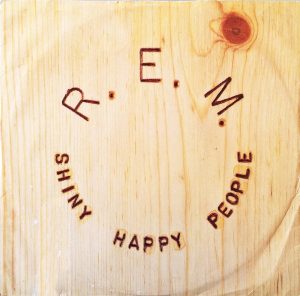 For one thing, it features Peter Buck’s best riff on Out of Time, a spindly circular near-psychedelic lick that bounces off of some well-placed handclaps (!) and underscores a fantastic vocal arrangement of lyrics that were purposefully supposed to be both shiny and happy. Which I know is why people hate this song.

Meet me in the crowd, people, people
Throw your love around, love me, love me
Take it into town, happy, happy
Put it in the ground where the flowers grow
Gold and silver shine

Yes, this is all very silly. That’s the fucking point, though: to try and write the happiest-sounding song possible and fly in the face of all of our dark Generation X angst that pretty much everybody else — including R.E.M. on the very next song — was trafficking in. And they succeeded: faking it so real they were beyond fake.

And I love the early deployment of “Shiny Happy People’s” secret weapon, the utterly awesome Kate Pierson from the B-52s — a band who came along so early in the Certain Songs run, I completely underserved them — who sneaks in some harmonies at the end of the early lines, and then is smack dab in the center of the chorus.

In the end kicked off by a “here we go!” from Stipe — anchored by a overdubbed “dut dut dut dut dut dut dutdet dut” from Mills — they start weaving their voices in and around each other and along with Buck’s guitar riff and the handclaps it’s just a perfect pop moment.

Despite the near-immediate backlash, “Shiny Happy People” was another huge hit for R.E.M. — cracking the top 10 — making Out of Time the first (and last) R.E.M. album which had two top 10 hits. It was also the first R.E.M. song to crack the top 10 in the U.K., kicking off a reversal of fortune that would have them routinely landing songs deep into the U.K. charts long after they’d disappeared from the U.S. top 40.

A postscript: despite the fact that they never played it in concert — limiting its exposure to Saturday Night Live and a Spanish TV show — in 1999, they were convinced to reprise it on Sesame Street as “Furry Happy Monsters,” which I’m going just assume was the first time a lot of millennials heard R.E.M.