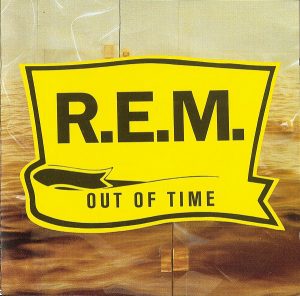 After the straight-forward uplift pop of “Shiny Happy People,” Out of Time took a lyrical turn towards darkness that lasted the rest of the album, starting with the spoken word opening verse of “Belong.”

Her world collapsed early Sunday morning
She got up from the kitchen table
Folded the newspaper and silenced the radio
Those creatures jumped the barricades
And have headed for the sea, sea

At once the most experimental and most gorgeous song on an album that was utterly suffused with both weirdness and beauty, the verses of “Belong” featured Bill Berry riding his hi-hat while every kick and snare beat was enhanced by alternating finger snaps and handclaps(!). (It’s really only a coincidence that nearly every song I’m writing about from Out of Time has handclaps.) (Or, is it?

Those creatures jumped the barricades and have headed for the sea
She began to breathe, to breathe at the thought of this freedom
Stood and whispered to her child, belong
She held the child and whispered
With calm, calm; belong

And those spoken verses alternate with a wordless chorus where Michael Stipe, Mike Mills and Bill Berry all sing “oooooooooooooooooh” in and around each other in varying degrees of unison and harmony while Peter Buck jangles the fuck out of his guitar and Mike Mills provides a big bass hook turnaround every few measures, kickstarting it all again.

And it is just about the saddest, loveliest thing I’ve ever heard, their almost otherworldly wails of what had to be grief, right?

Those barricades can only hold for so long
Her world collapsed early Sunday morning
She took the child held tight, opened the window
A breath, this song, how long?
And knew, knew; belong

“Belong” is one of those songs that leverages R.E.M.’s understanding of how the voices of Stipe, Mills and Berry can blend to create something greater than the individual parts, and while I guess it’s not really a “song” in the traditional meaning of the word, it’s an incredibly pretty piece of music.