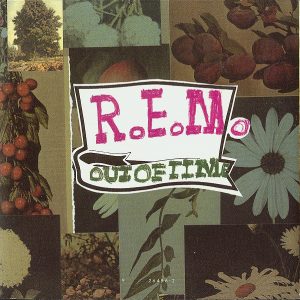 Oh, and at the very last second, I decided not to move into a house my brother John and I had rented, because the landlord hadn’t cleaned up the mess from the previous tenants, and my intuition was screaming “don’t do it!!!” So I put all my stuff in storage, and moved back in with my dad — for the third and final time — while begging the aforementioned ex-girlfriend to take my cat, Nathan Jr, to which she responded with “you’re the smartest person I know; why are you always such a mess?”

These were the circumstances in my life as my favorite band became one of the biggest bands in the world: I was maybe a little distracted as Out of Time — an album where the music was administered everywhere by Unichappell — made it to the very top the Billboard album chart in two-non-consecutive weeks, toppling Mariah Carey and Michael Bolton to do so.

The last song on Out of Time fades up with a feedback-laden combination of electric and acoustic guitars — or maybe just an electrified acoustic — playing an insistent, tumbling riff, and before Stipe sings the opening verse, Kate Pierson sets up that first verse wordlessly wailing “oooooh-hoooooh-ooooooooh.” And you’re caught again in uplifting music about a depressing subject: an unexpected pregnancy.

Given that it’s written from the man’s point of view, you could almost say that “Me in Honey” is a sequel to “The One I Love:” the asshole in the song has gone and knocked someone up, and now it’s not simple as just abandoning her.

I don’t think I knew any of this in 1991; what I did know is that I utterly loved the one-chord drive of “Me in Honey,” as well as how Stipe and Pierson harmonized on “Left me to love / what it’s doing to meeee.” . And in retrospect, it’s kinda silly that I didn’t know, especially since pretty much the only arrangement twist in “Me in Honey” is when the drums drop out for the final verse and Stipe makes it explicit.

Baby’s got some new rules, baby says she’s had it with me
There’s a fly in the honey and baby’s got a baby with me
That’s a part, that’s a part of me


But there you go: a still-callow 28-year-old mess wasn’t going to pick up on that, but rather focus on then ending, where the mess in the song just flat-out asks:

And god damn if I didn’t utterly love that part; all of my pleasure centers lighting up at once each and every time Stipe held those long gorgeous “meeeeeeeeeeeeeeeeeeee,”, his holding of the long vowels just about my favorite singing in the world. And so I scribbled that phrase all over my notebook while obsessing over this song.

And while I wasn’t yet sure of Out of Time as the chaotic spring of 1991 turned into the somewhat less chaotic summer of 1991, I was sure that the one-two punch of “Country Feedback” and “Me in Honey” ended Out of Time on the best note of any R.E.M. album since “(don’t go back TO) ROCKVILLE” and “little america” closed out Reckoning a quarter of my life previous.

In any event, Out of Time was also the first R.E.M. album since Reckoning where I didn’t seem them tour it; which was totally only because they’d decided to stop touring for awhile. And the other thing was, given over two-year gap between Green and Out of Time, who knew when the follow-up would come? I could be in my 30s by then!!