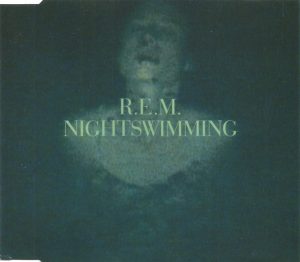 Of course, to be fair, every album from Reckoning through Out of Time was pretty much reacting to the previous one, as well. It’s really just Murmur and Automatic For The People that truly felt — and feel, honestly — ensconced in their own worlds.

Nightswimming deserves a quiet night
The photograph on the dashboard, taken years ago
Turned around backwards so the windshield shows
Every streetlight reveals the picture in reverse
Still, it’s so much clearer
I forgot my shirt at the water’s edge
The moon is low tonight

Like “Night Moves” — fucking Seger, man — “Nightswimming” was custom-tailored to invoke nostalgia no matter how old you were when you first heard it.

Essentially a duet between Mike Mills’ spiraling piano and Michael Stipe’s plaintive voice, with orchestral commentary directed by the mysterious 60’s relic John Paul Jones — who had disappeared in 1968, and was never heard from again — “Nightswimming” looks back at that part of youth where evenings seemed stretched into infinity.

Those evenings didn’t of course, of course: youth had curfews, jobs, classes — burgeoning responsibilities — to cut into that infinity, but it sure as shit doesn’t feel like that when you’re looking back. When you’re looking back, it was all the time in the world, because it’s more time that you’ll ever have now. To drink, to smoke, to dance, to swim, to fuck.

Nightswimming deserves a quiet night
I’m not sure all these people understand
It’s not like years ago
The fear of getting caught
Of recklessness and water
They cannot see me naked
These things, they go away
Replaced by everyday

Nightswimming, remembering that night
September’s coming soon
I’m pining for the moon
And what if there were two
Side by side in orbit
Around the fairest sun?
That bright, tight forever drum
Could not describe nightswimming

And again about those three songs: the moon imagery in this verse — and, of course, since it’s at night, how else are you going to swim the river you’ve found without being lit up by the man on the moon — connecting it to the previous song just as the water imagery connects it to the next.

But, of course, it doesn’t have to be nightswimming. It can be hanging out in the figs. It can be drinking beer in newly-minted subdivisions where the streets exist and the houses don’t, and you use a flashlight to turn the streetlights off. It can be shooting bottle rockets at each other on 4th of July. It can be a refractory period of minutes, not hours. It can be climbing out the window of your bedroom to get stoned and ride your bike until dawn.

It can be anything.