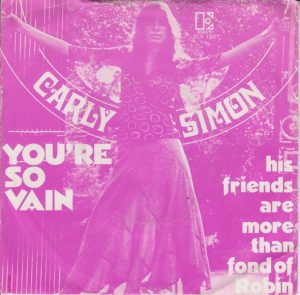 Decades before Taylor Swift got criticized for writing songs about her ex-boyfriends, Carly Simon did the same damn thing, and has been playing hide-and-seek with the truth ever since. Warren Beatty? Mick Jagger? David Geffen? In the end, it really doesn’t matter, because “You’re So Vain” is a textbook pop single.

First off: the production, spearheaded by 1970s uber-producer Richard Perry. At least until the strings come in at the end, “You’re So Vain” is kinda sparse and surprisingly swampy, allowing you really hear the sly internal rhymes (”yacht,” “apricot” “gavotte” is genius) in each verse.

Even better is how each the drums in each verse drop out at the end for just a measure or so before building into the chorus.

About that chorus. It’s just brilliant, isn’t it? It’s one of the all-time great “fuck yous” to be sure, but there’s also a bit of a wistful sigh that undercuts the nastiness.

Oh, and from the second verse on, that other voice doubling Carly Simon’s? Mick fucking Jagger, doing some of the best harmony singing of his life. If you listen for it, you can totally here his unmistakable cadence on the “Don’chews,” but he’s also not dominating. I’m guessing that there are people who have gone their entire lives not knowing that he sang on this song.

It all added up to a song that sound amazing on the AM radio – just fucking huge to my pre-teen ears – and was not only a huge smash at the time, but has become a pop culture staple.