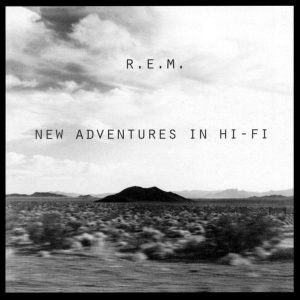 And then, in August, while reaching for one of the high notes on relatively new “Undertow,” Michael Stipe got a hernia, and was out for a couple more weeks, and while it didn’t cause them to miss any more dates, I’m sure people started keeping an eye on Peter Buck, just waiting for whatever calamity was clearly going to befall him.

Luckily, nothing did, clearly another correlation between good health and drinking plenty of alcohol.

In any event, in the midst of all of this chaos, they were able to record the bulk of New Adventures in Hi-Fi, including the mighty “Undertow,” which starts off with a big rumbly Mike Mills bassline and Bill Berry working his toms while Peter Buck and second guitarist Nathan December make like they’ve just found and jumped into the river.

Most of the time, the music of R.E.M. songs don’t necessarily sound like the subject matter, especially after the 1980s, when the other guys would come up with music independently of the lyrics that Michael Stipe would come up with, but “Undertow” well and truly evoked gigantic waves underneath which you could get pulled under if you didn’t keep your wits about you. And by the sound of it, Stipe was losing his, even as Mike Mills tries to help out.

Of course, the irony of all of this is that Stipe is waxing metaphorical here, exploring the ongoing relationship between religion and water — both metaphorical and physical — as it relates to his own beliefs. Though it could be in character. Which is also why it makes sense that “Undertow” follows “New Test Leper” on the album.

There isn’t a whole lot to “Undertow” beyond the big rumbly verses and soaring anthemic choruses, but then again, that was pretty much all it needed, and I also think — like a lot of the rock songs on New Adventures in Hi-Fi — it benefited by being recorded live, without a whole hell of either time or need to add a bunch of overdubs or effects.