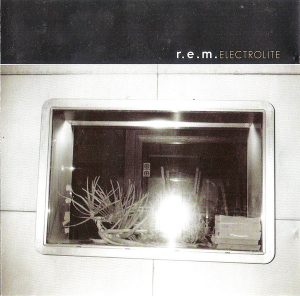 And so, fittingly, the first thing you notice about “Electrolite,” recorded during a soundcheck in Phoenix in November ’95, is the beat: straightforward and simple, Berry doing the double backbeat on his snare on every other measure throughout pretty much the entire song.

That beat is in perfect time and tune with a great, understated Mike Mills piano part, augmented by Peter Buck on, er, banjo. And while I do hear what sounds like atmospheric guitar washes here and there, “Electrolite” is driven by the piano and the drums. Oh, and the utterly lovely chorus.

A love letter to Los Angeles — in and of itself an anomaly — or at least an idea of Los Angeles, the second verse finds Stipe driving on a road that skirts the top of the city, a road I drove on all the time when I was commuting to job in Beverly Hills in the mid 2010s, and yeah, sports some spectacular views and causes some spectacular daydreams.

And I’m pretty sure that nearly every time I turned onto, or even crossed Mulholland back then, this song came into my head, unbidden, no matter what else was on. Meanwhile, Stipe himself told a story on VH1 about how he shared a dentist w/ Martin Sheen and told Sheen about this song, and Sheen was impressed. Of course, that was before he became President, so he might have felt different a few years later.

About halfway through, violinist Andy Carlson comes in with what I think is still the only violin solo on a R.E.M. song (though maybe there was one I’m missing on Reveal or Around The Sun), all of which leads to the final verse, during which Stipe knowingly bids adieu to the decade and the album, and unknowingly, to that phase of his career.

So let’s sum up where we were at the end of “Electrolite:” In 15 years, R.E.M. had released 10 studio albums, one EP, and a couple of compilations. None of which were less than very good and most of which would rank with the greatest albums of their era, but ever. And they were still making great music. While it wasn’t unprecedented: The Rolling Stones made Some Girls & Tattoo You that late in their career, and we’ve discussed the longevity / quality arcs of Bob Dylan, Neil Young, Lou Reed & Prince ad nauseam, but the only other band — a much harder thing to keep together — that was still making great music with their original members this late into their career was U2.

In any event, it obviously seemed like they could go forever, or at least until December 31, 1999, a date which way back in 1986 somebody had joked was when they were going to break up for good.

Which just means that no one, most of all Michael Stipe, Mike Mills & Peter Buck, were prepared for what was going to happen next.