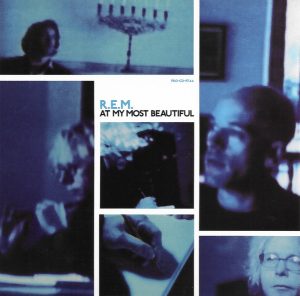 When presented with the backing track and the concept, Michael Stipe decided to make the lyrics the most straightforward love song he had yet written, and in doing so, might have finally answered the age-old question “How do you say ‘I love you’ to an answering machine?”

With non-drummer Peter Buck doing periodic big drum fills while the actual percussion resides in tambourine and sleigh bells and the beat resides in the piano, “At My Most Beautiful” gets over on the sheer beauty, as well as the sincerity of the performances. To be honest, R.E.M. never really did irony well: early on they were too obscure to be ironic, and when they finally confronted the world, the most ironic they ever got was singing “I feel fine.”

And so even as someone who has always found those teenage symphonies to god too symphonic for his inner teenager — that guy remains a dumb-ass rocker — when Mike Mills sings his “do do do do do do do” backing vocals, my heart grows three sizes larger each and every time. That said, unlike many of the songs on Up, they could have gotten away with “At My Most Beautiful” pretty much any time in the 1990s, with the exception, I think of Monster. Though even that had “Tongue.”

In any event “At My Most Beautiful” was one of the singles they released from Up — the others were “Daysleeper,” “Lotus” and “Suspicion” — none of which did anything on the U.S. charts, though in the U.K., “At My Most Beautiful” went to 10 in the U.K., the middle of a run that each album from Out of Time through Around The Sun would have at least one top 10 U.K. hit.

“At My Most Beautiful”


“At My Most Beautiful” official music video


“At My Most Beautiful” on Later With Jools Holland, 1998