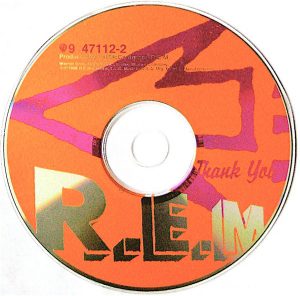 If we’re talking about love
Then I have to tell you
Dear readers, I’m not sure where I’m headed
I’ve gotten lost before
I’ve woke up stone drunk
Face down on the floor

The difference between “Sweetness Follows” and “Sad Professor” is that the former kinda floats into its chorus — Stipe not really changing his affect, the music too weary to do anything else — while the latter had a truly anthemic-sounding chorus, even as the words somehow get bleaker during it.

Probably my favorite bit of singing on all of Up are during these choruses, especially the way he nails “I started / I jummmmmmmmmmmmpeeed uuuuuuuuuuuup” while Peter Buck crunches this electric guitar and Mike Mills bangs away underneath on a piano. It’s a fantastic contrast between a truly stirring piece of music and a completely depressing lyric.

It’s also a cooly ambiguous lyric: for years I’ve wondered exactly what a “sad professor” was. Is it someone who is a Professor but is also sad? Or is it someone who is always going around professing how sad they were. Probably the latter, of course, but I often think of it as the former. Either way, when Stipe sings “I hate where I wound up,” there is no ambiguity whatsoever about that.