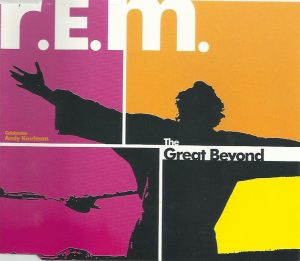 Musically, “The Great Beyond” was a true transition single, straddling the line between the electronic soundscapes of Up and the lusher feel of Reveal. Honestly, it would have enhanced either album — especially Reveal — but since it was written specifically for Man on the Moon, it’s kind of this weird anomaly, showing up only on greatest hits albums and R.E.M. Live.

Outside of a cool synth trill playing around with a quick guitar lick, “The Great Beyond” is a slow burn and uses one of R.E.M’s oldest tricks: the pre-chorus that you initially mistake for a chorus because it’s so catchy in its own right but still gets upstaged when the real chorus comes in.

I’m breaking through, I’m bending spoons
I’m keeping flowers in full bloom
I’m looking for answers from the great beyond

After a brief interlude where the strings come in, they double and triple down on the chorus, Mike Mills doing stellar work on the harmonies, Michael Stipe sneaking in some lyrics in from “Man on The Moon” for good measure. While it probably didn’t advance their art any, “The Great Beyond” reminded everybody why we loved that art in the first place.

And while it basically stiffed as a single — though it did well on the radio stations that were still playing new music from bands like R.E.M. — in the U.S., “The Great Beyond” was R.E.M.’s highest-charting single in the U.K., making it to #3, so good job U.K.!


“The Great Beyond” official music video