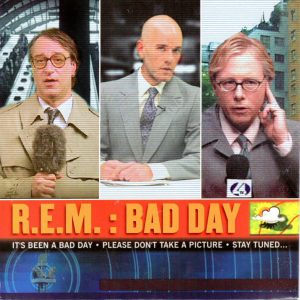 Especially since they’d already issued a song that was against Iraq 2.0, the acoustic “Final Straw,” which . . . didn’t really do anything for me, either musically or lyrically, though I wasn’t worried about what it boded for the next R.E.M. album, especially when I heard the re-recorded “Bad Day,” which just killed.

A Public service announcement followed me home the other day
I paid it never mind. Go away
Shit so thick you could stir it with a stick-free Teflon whitewashed presidency
We’re sick of being jerked around
Wear that on your sleeve

Sure, maybe the riff and melody were 18 years old — as impossible as that sounded — but the sentiments rang incredibly true in 2003. And nearly 18 years after that, it kinda still makes sense. Maybe even more sense, given . . . well, everything.

Broadcast me a joyful noise unto the times, lord
Count your blessings
We’re sick of being jerked around
We all fall down

And it’s funny: I love the updated “Bad Day” because it was full of contradictory tension: Buck, Mills, Stipe and merciless new drummer Bill Rieflin — seemlessly making the transition from playing for Ministry and Nine Inch Nails to playing for R.E.M. and Robyn Hitchcock (now he’s with King Crimson) — were rocking out like it was 1986, but the full-throated anger Stipe was pure 2003.

We’re dug in the deep the price is steep
The auctioneer is such a creep
The lights went out, the oil ran dry
We blamed it on the other guy
Sure, all men are created equal
Here’s the church, here’s the steeple
Please stay tuned, we cut to sequel
Ashes, ashes, we all fall down

Broadcast me a joyful noise
Unto the times, lord, count your blessings
Ignore the lower fears
Oh, this means war

Luckily, the back half of “Bad Day” is pure pleasure, especially with Mike Mills backing vocals, overdubbing “ahhhhhh-aaaaahhhhhh-ahhhhhhh” as well as counterpoint “dooo-doooo-doooo-dooooo-dooooos”, all of which was just catnip for me, as well as the hints of harmonica — a callback to the demo — that became more than hints whenever they played it live, Stipe just making horrifically joyful noises for the sheer fuck-all of it.

There was also a really cool video for “Bad Day,” featuring maybe the only time Peter Buck fully participated in any R.E.M. videos as Stipe played an newsanchor and Buck and Mills as field reporters, all of them mouthing the words to the song while the screen was inundated with text and the relatively new technology of the ongoing crawl of news, which then represented the computer desktopification of your TV screen but now is just the way things are.

Unsurprisingly, “Bad Day” went nowhere on the U.S. charts, but it made it to #8 in the U.K., while the In Time album was the only one of their greatest hits albums to be a huge smash — despite the fact that most of its songs were on their biggest-selling albums — and indeed was the album they were touring the final time I saw them, at the Hollywood Bowl in 2003, which was a better experience than 1995 at the Shoreline on just about every level.

In any event, the fact that they could rework “Bad Day” — a song I’d cherished for over a decade — and make it sound so much better really got me excited for their next album.