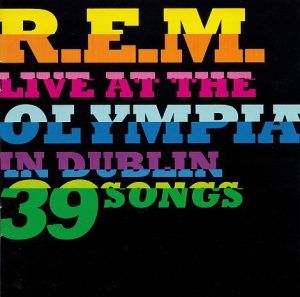 Ah, but the second live album, clumsily titled Live At The Olympia In Dublin 39 Songs, is fucking fantastic, like I’m standing right there in front of them while they play a shitton of songs from their entire career. The only record not represented was Out of Time.

Essentially a public rehearsal to get them up to Accelerate’s return to rock — recorded before, but released after — a hilarious and self-depreciating Michael Stipe called the whole “an exercise in terror.”

Because Accelerate was a concept album about rocking out once again, the whole band — including drummer Bill Reiflin and everything Scott McCaughey — was loose and limber, with the tracklist focusing heavily on the early songs, especially Reckoning and Chronic Town. Which, of course, was fucking catnip to me. Put it this way: including this song right here, I will have written about 22 of the 39 songs on this record. Which is a great batting average.

On Chronic Town, “1,000,000” is one of the most controlled of the songs: Peter Buck’s guitar chimes and jangles and Michael Stipe keeps on the melody line. The only real frisson comes from Bill Berry’s tumbling tom fills.

A quarter-century later, with nothing to prove nor lose, “1,000,000” comes roaring out of the gates with the guitars of both Peter Buck and Scott McCaughey set for maximum fuzz, even on the jangly parts, and with Bill Reiflin deep in the pocket, it rocks the fuck out, with Michael Stipe having fun pronouncing “stone” as “stoin” and stretching out “smarter too-ooo-hooo” in the second verse.

Oh, and there’s also a great harmony on the chorus from Mike Mills that helps capture both the ludicrousness and hope of “I could live a million years.”

Breathing new life into songs your fans have treasured and listened to for decades is no mean feat, but “1,000,000” is hardly the only great performance of a great song that exists on the clumsily-titled Live At The Olympia In Dublin 39 Songs, which is easily my favorite R.E.M. release of the 2000s and as such is highly highly recommended to both people who have never heard them and hardcore fans alike.