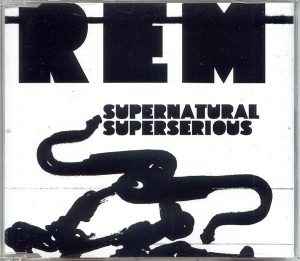 That opening verse is sung over some big Peter Buck power chords, which quickly resolve in the familiar jangle as Stipe tells the tale of a a teenager dealing with being out of their element. Going through changes that can sometimes be overwhelming. Luckily, R.E.M. is there to help, with an absolutely classic chorus, featuring the guitars jangling back and forth and Mike Mills adding both bass hooks and backing vocals.

And I guess the cynical can just dismiss this as “same as it ever was,” but it hadn’t been this much the same in 20 years, and there is definitely some comfort in that — especially now that they’ve been broken up for almost a decade — and if you can somehow find new ears to listen, it’s almost impossible to resist how gracefully the second chorus floats into the bridge.

“Enjoy yourself with no regret” is the kind of lyric that only someone older and wiser could possibly write, which is a great reminder that no matter now much like “classic” R.E.M. the songs on Accelerate sounded, they were never going to be the kids from Athens, Georgia who combined the golden sounds with the mysterious lyrics. There was nothing mysterious about the outro of “Supernatural Superserious,” especially when Mike Mills came in with the harmonies at the end.

Interestingly enough, this back-to-basics moved kinda bombed in their stronghold of the U.K., where the single topped out at #54, but it was the first R.E.M. single to make the Billboard charts since “Imitation of Life,” even if it topped out at #85. And while that’s nothing compared to past glories, it still seems not terrible for a legacy rock act in 2008.