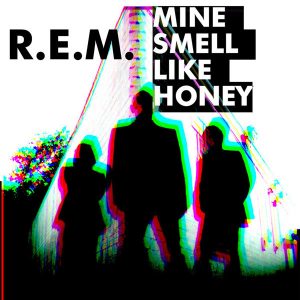 Right. The aformentioned is sung over some seriously fuzzy guitars and speedy beats, and while you would initially assume that the chorus was when Stipe sang the chorus, you would be wrong, as “Mine Smell Like Honey” is the final instant of R.E.M.’s greatest trick: the catchy-in-and-of-itself pre-chorus that is eclipsed by the chorus, a trick that went all the way back to “Talk About The Passion.”

And so with Buck switching from fuzzy fuzz to fuzzy arpeggios and Mike Mills holding the long notes on the backing vocals, the chorus of “Mine Smell Like Honey” would have killed at any time in the previous 30 years. It just happened to come at the end of those 30 years, that’s all

And in a beautiful callback, I’m just guessing at what Mills is singing in the background, especially because he didn’t even bother doing anything but harmonies in the live version. Yeah, there was a live version: R.E.M. did one last performance — in July 2010 at the studio in Hansa by what used to be the wall — of some of the Collapse Into Now songs for family and friends. And you can tell that the whole thing was just as emotional as all hell. Because by this time, everybody knew. Except of course, for us, the fans, who were still blissfully unaware.