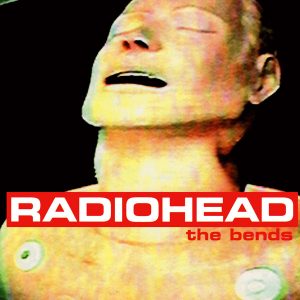 Which is also somewhat ironic, as it’s probably their nosiest album, guitarists Jonny Greenwood and Ed O’Brien adding rude sounds to even their most acoustic-based songs, like the singles “High and Dry” and “Fake Plastic Trees,” both of which I heard on radio, but neither of which enjoyed as much as the title track, which started off with massive guitar chords and couple of Thom Yorke wails before dropping into a quiet opening verse.

But after that, “The Bends” continually fucks with its arrangement, not so much straying from the traditional verse-chorus-verse, but rather with the instrumentation on the verses, always leading back to the soaring chorus.

My baby’s got the bends, oh no
We don’t have any real friends
No, no, no

There’s also a cool post-chorus sequence that comes up a couple of times where it’s just Yorke over Phil Selway playing almost a hip-hop beat while the guitars glisten and clang in the background.

Just lying in the bar with my drip feed on
Talking to my girlfriend, waiting for something to happen
I wish it was the ’60s, I wish I could be happy
I wish, I wish, I wish that something would happen